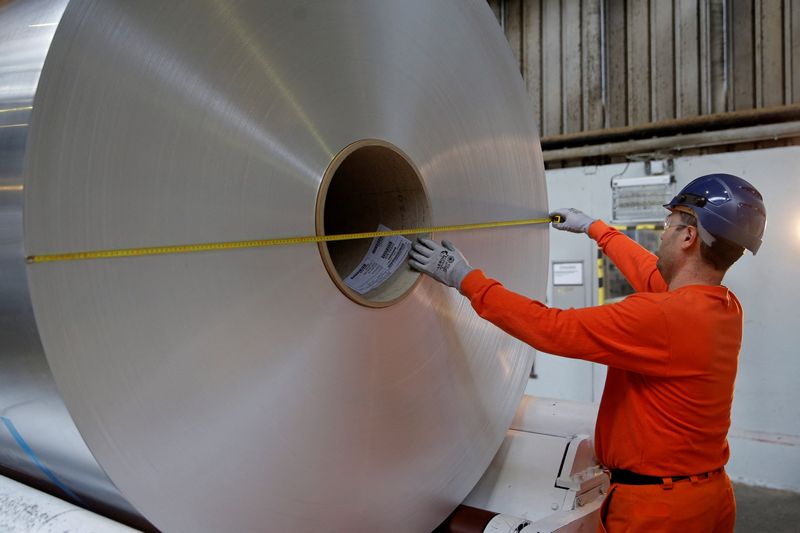 LONDON (Reuters) – Costs of aluminium for European consumers are scaling record highs due to soaring energy costs and production cuts, which have exacerbated deficits of the metal used in the power, construction and packaging industries.

Consumers buying aluminium on the physical market usually pay the benchmark price on the London Metal Exchange — around $2,950 a tonne on Tuesday — plus a physical market premium that typically covers transport costs and taxes.

But shortages mean traders and producers with inventory are able to command a significantly larger premium, which in Europe has shot up nearly 30% to a record $428.75 a tonne since the start of 2022.

“With around 650,000 tonnes of capacity cut so far in Europe, we believe that another 900,000 tonnes of output is at risk of closing down fully or partially,” said Michael Widmer, analyst at BoA Securities.

Milder than usual wind speeds in Europe last year and windmills across the bloc generating less electricity worsened a crunch that sent power prices to record highs as utilities had to buy more coal and scarce, costly, natural gas.

Before the power crisis, energy accounted for up to 40% of aluminium smelting costs. Depending on hedges and sources of power that figure has risen to 50% or more for many producers.

“As we enter 2022, European producers are still plagued by elevated power costs and there seems to be no sign of a quick solution to the issue,” said ING analyst Wenyu Yao

Yao expects the global aluminium market to see a deficit around 1.5 million tonnes this year.

“Stocks should have started to build in the (top producer) China onshore market following seasonal patterns,” Yao said. “But instead, these have declined to 766,000 tonnes as of Monday, far below the five-year average.”

Shortages of aluminium since early last year have seen draws on stocks, which in LME warehouses have more than halved since the middle of March last year.