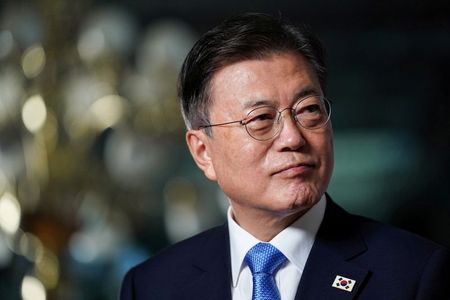 Moon made the pledges in a speech to an opening ceremony for the 2021 Partnering for Green Growth and the Global Goals 2030, or P4G, summit, which kicked off for a two-day run online amid the coronavirus pandemic.

Organisers of the summit are calling for participating countries to take action to implement emissions targets made at other climate summits.

Moon said the country would raise its emissions reduction goal and unveil it at the U.N. Climate Change Conference to be held in the Scottish city of Glasgow in November.

Seoul had set a target of net-zero emissions by 2050 and pledged to reduce its emissions by 37% from business-as-usual levels by 2030, end funding of overseas coal plants, and introduce a carbon tax.

South Korea will also launch a $5 million “Green New Deal” fund by 2025 within the Global Green Growth Institute (GGGI) and donate $4 million to support the operation of P4G, Moon said.

The GGGI is an international organisation that was set up in Seoul in 2010 to help emerging countries to fight climate change while boosting economic growth.

The pledges were seen as a bid to show South Korea’s leadership as the host of the summit, though the country remains one of the world’s most fossil-fuel reliant economies.