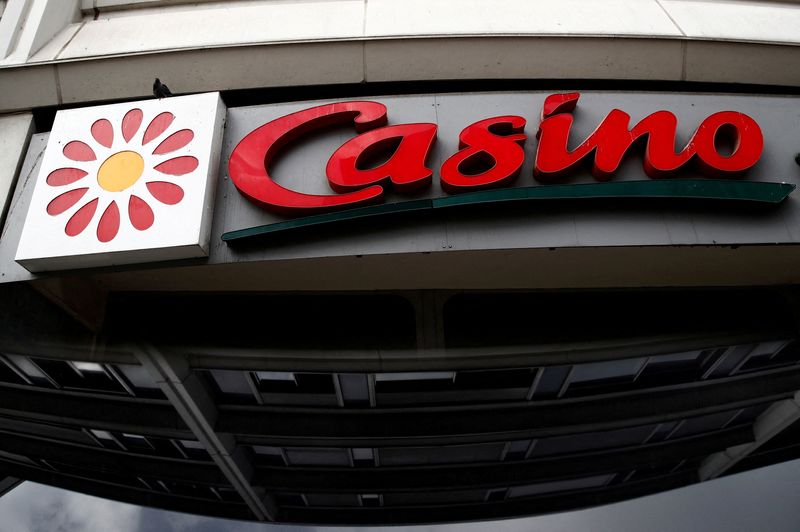 PARIS (Reuters) -Shares in supermarket group Casino slumped on Monday after the company cut the 2021 profit outlook for its French retail operations, igniting investor worries over its ability to boost cashflow in a tough domestic market.

Casino blamed the downgrade on a steeper-than-expected decline in France’s food market in the fourth quarter, notably in the Paris region, where it has a large presence through its high-end Monoprix stores, a key profit contributor.

By midday Casino’s shares were down 13%. Its woes weighed on its larger domestic rival Carrefour, whose shares also fell 5.7%.

Analysts at investment bank Jefferies said their focus would now be on “how profit pressures are translating into cashflow and leverage pain”, with Casino reporting its annual results on Feb. 25.

The group, which had previously forecast higher profits this year in France, said it now expected a 1.7% drop in 2021 earnings before interest, tax, depreciation and amortisation (EBITDA) at its French retail operations to around 1.28 billion euros ($1.43 billion)..

“The combination of still-depressed tourist visits and a recovery in out-of-home food consumption late in 2021 was likely a toxic combination for Casino’s critical profit generators Monoprix/Franprix,” they wrote.

In November Casino reported that its French sales had fallen 4.3% in the third quarter after sliding 8.4% in the previous three months, hit by a drop in tourist traffic in the Paris area due to COVID-linked travel restrictions.

JPMorgan analysts said in a note that the update “should imply mid-single digit further downgrades to current expectations”.

Highlighting Casino France’s “deteriorating outlook”, they said that because the group was “predominantly high-end” it was exposed to competition from discount and hypermarkets in an economic downturn.

“We see Casino’s issues as mostly company-specific and see no risk to Carrefour guidance at this point,” they added.