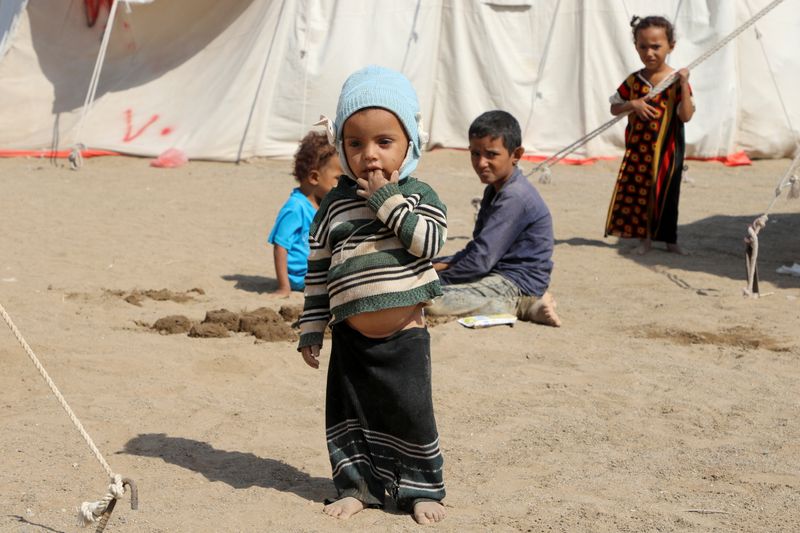 AL-KHOKHA, Yemen (Reuters) – Hasan Jafar Hasan fled his home at night in a crowded truck after a sudden withdrawal of Yemeni forces under a Saudi-led coalition from around the port city of Hodeidah shifted long-standing frontlines.

Fearful of an unstable situation as Houthi forces moved into the spaces left by retreating government troops, Hasan and his family have joined the around 4 million Yemenis displaced by the seven-year-old conflict.

“We left with only the clothes on our backs…in a small truck like animals, like cattle,” he said, describing the journey his and eight other families made in the vehicle from a suburb south of Hodeidah to a hastily erected camp of white tents around 80 km (50 miles) south down the Red Sea coast.

With international aid budgets squeezed and many areas hard to reach, life in Yemen’s displacement camps is tough with few resources.

“We have little money and no income. We barely scrape through with the one meal we are given. We can’t ask for more. We have little kids who need juice, milk, biscuits and other essentials,” he said.

Communal water butts have been built and a mobile health clinic drives around the dusty camp where children roam.

The al-Wara camp, around 5 km (three miles) outside al-Khokha, started taking people in on Nov. 13 and has so far received 250-270 displaced families, said deputy camp director Jihad Mohamed Asli. He works for the humanitarian wing of a pro-government military group.

Despite some skirmishes between the Saudi-backed coalition and Iran-aligned Houthi forces, Hodeidah province has seen little fighting since 2018 when the warring parties in Sweden agreed a local ceasefire.

The conflict, in which the coalition intervened in 2015 against the Houthis to restore the internationally recognised government, has killed tens of thousands and caused a humanitarian crisis.

The United Nations is leading efforts to engineer a nationwide ceasefire needed to restart political talks.