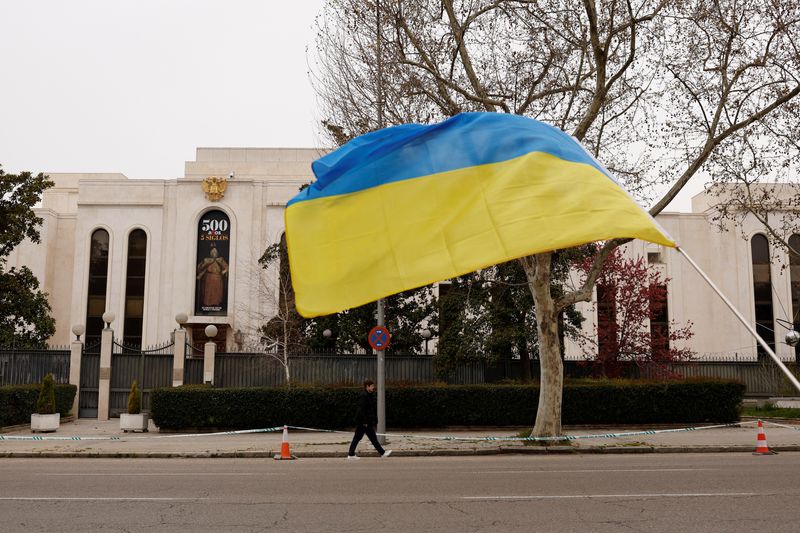 MADRID (Reuters) -A Spanish judge on Thursday ordered the release of a pro-Russian Ukrainian blogger who was detained the previous day on an international arrest warrant for suspected treason, but barred him from leaving the country pending an extradition hearing.

Spain’s High Court said in a statement that Judge Jose Luis Calama had ruled Anatoliy Shariy, an aspiring politician and vocal critic of Ukrainian President Volodymyr Zelenskiy and his pro-Western government, should present himself to the nearest court twice a month and surrender his passport.

The judge said there were not enough reasons for keeping him in custody, considering that he has taken roots in Spain.

A police source said the 43-year-old had been detained in the coastal city of Tarragona in Catalonia.

Earlier, Ukraine’s SBU security service said in a statement Shariy was detained on Wednesday in an operation coordinated between Ukrainian authorities and Spanish police on suspicion of committing treason and the crime of “breaching the equal rights of citizens” based on race, nationality or other attributes.

“SBU investigators consider that Shariy carried out unlawful activity detrimental to Ukraine’s national security in the information sphere. There are reasons to believe that Anatoliy Shariy acted on orders of foreign bodies,” it said.

Ukraine declared Shariy a suspect a year before Russia’s invasion of its neighbour on Feb. 24.

After his investigative reports featuring frequent criticism of Ukrainian authorities led to problems with the law and following an attempt on his life, Shariy has lived in self-imposed exile in the European Union since 2012: first in Lithuania, then in the Netherlands and in Spain.

Shariy has taken a particularly pro-Russian stance since the 2014 Maidan uprising in Ukraine and Russia’s annexation of Crimea.

A frequent guest on Russian state TV channels, he supported the Kremlin’s narrative of Ukraine being a Western “colony” dominated by Russian-hating neo-Nazis in his videos, justifying the invasion and accusing the Ukrainian media and Zelenskiy of manipulating public opinion in the West.

In 2019, he registered a Ukrainian political party, called The Party of Shariy, which won a few dozen seats in several regional assemblies.

Ukraine’s National Security Council suspended the party, along with several others linked to Russia, in March following Russia’s invasion.