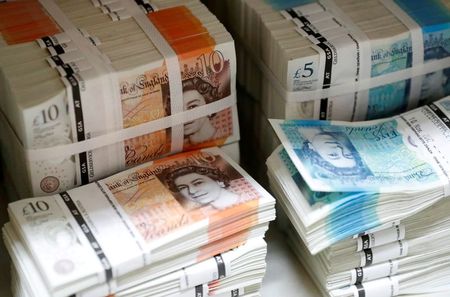 The pound appeared unaffected by the news and gained against the dollar for a second week on Friday, helped by better than expected economic data that indicated Britain’s economy may be rebounding from its worst annual contraction in 300 years.

Prime Minister Boris Johnson is facing a stream of allegations in newspapers about everything from his muddled initial handling of the COVID-19 crisis to questions over who financed the redecoration of his official apartment.

Defence Secretary Ben Wallace has denied a report that Johnson said he would rather bodies piled “high in their thousands” than order a third social and economic lockdown to stem coronavirus infections.

Asked last month about the refurbishment plans, Johnson’s spokeswoman said all donations, gifts and benefits were properly declared, and that no party funds were being used to pay for the refurbishment.

Bets on an economic rebound have fuelled sterling’s rise against the dollar and euro this year as Britain’s COVID-19 vaccination programme outpaced its peers. The country is emerging from a third national lockdown, and is preparing for the second phase of lifting restrictions.

“The political noise surrounding sleaze allegations against the Conservative government have yet to do any real damage to GBP and instead the focus will be on early indications on the pick-up in activity as the economy reopens,” said Chris Turner, global head of markets at ING.

Net speculative long positions on sterling – or the total of market bets the pound will increase in value to the dollar – slipped marginally in the week up to last Tuesday, CFTC data on Friday showed. The market still remains long on the pound.

“We think net long positions on the pound are here to stay thanks to the upbeat expectations on the UK recovery that have been fuelled by fast vaccinations and looser virus containment measures,” ING’s FX strategist Francesco Pesole said in a note to clients.

Bank of England Deputy Governor Ben Broadbent has forecast consecutive quarters of rapid growth but also warned that inflation will prove less predictable, according to an interview with the Telegraph newspaper.

It may be too soon to call a “roaring twenties” scenario, but it certainly means “very rapid growth at least over the next couple of quarters” particularly as the economy will be boosted by people simply saving less, Broadbent said in remarks published Saturday evening in the Telegraph newspaper.