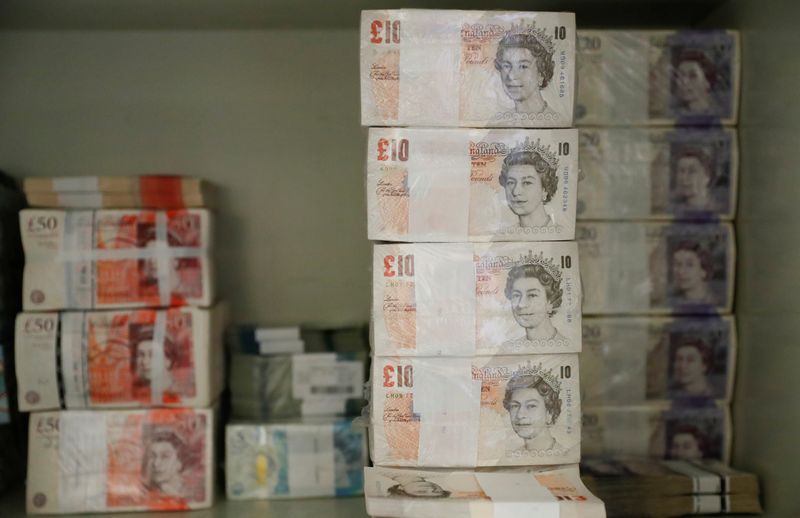 LONDON (Reuters) – The British pound held near a three-week low versus the U.S. dollar on Wednesday as latest comments by Fed officials highlighted a growing divergence between the U.S. and British central banks on how to tackle inflationary pressures.

Against the euro, sterling was little changed at 83.44 pence.

Fed policymaker Lael Brainard, typically one of the more dovish Fed board members, said on Tuesday that balance sheet reduction could begin “at a rapid pace” as soon as the central bank’s meeting next month.

A hawkish stance from the Fed had bolstered the dollar and contrasts with the Bank of England. BoE deputy governor Jon Cunliffe said earlier this week he did not believe expectations of persistently high inflation were becoming embedded in companies’ and consumers’ thinking.

Cunliffe was the lone voice who voted against the BoE’s decision to raise its interest rate for the third consecutive meeting in March.

The difference in borrowing costs between the U.S. and UK, as measured by the spread between their respective 5-year yields, turned further negative on Wednesday and is now at its most negative level since August 2019.

Money markets are still pricing in an additional 138 basis points (bps) of interest rate hikes from the BoE this year, which would take the key rate above 2.0%, but some analysts view this pace of tightening as too aggressive.

“BoE pricing is very much at odds with our house view that the BoE tightening cycle pauses at 1.00/1.25% this summer,” said ING analyst Chris Turner.

“If that is the case, GBP could have a rocky 2H22 as the cost-of-living crisis bites and the chancellor saves fiscal support for a 23/24 election.”

A survey meanwhile showed British construction activity in March at its joint highest since June 2021, with the wider all-sector PMI, which includes the previously released services and manufacturing data, at a nine-month high.