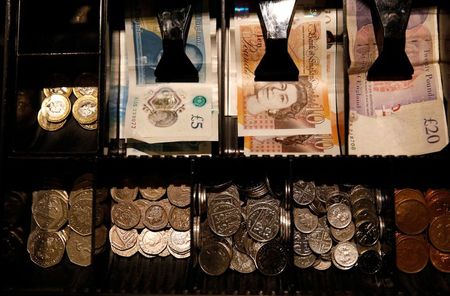 Recent movements in the pound have been dollar-driven, as investors price in earlier than expected tapering of asset purchases by the Federal Reserve after the U.S. central bank last week signalled higher rates in 2023. But Wednesday’s PMIs put the focus squarely back on data.

Inflation pressures faced by British firms hit record levels this month, and growth in the private sector cooled only slightly from an all-time high in May when coronavirus restrictions were lifted, a survey showed on Wednesday.

The preliminary reading of the IHS Markit/CIPS UK Composite Purchasing Managers’ Index (PMI) pointed to one of the strongest monthly improvements in business activity since 1998, with a reading of 61.7 – not far off May’s unprecedented 62.9.

Meanwhile, euro zone business growth accelerated at its fastest pace in 15 years this month as the easing of more lockdown measures and the unleashing of pent-up demand drove a boom in the bloc’s dominant services industry, a survey showed.

“Stronger eurozone PMI responses and a weaker UK survey may have contributed to sterling weakening against the euro as the data were released over the morning,” said Oliver Blackbourn portfolio manager at Janus Henderson.

“However, it is unlikely that the data changes the picture for the Bank of England tomorrow,” he said, referring to a meeting of the bank’s Monetary Policy Committee on Thursday.

Elsewhere, on the fifth anniversary of the Brexit referendum, European Union member states informally agreed to grant Britain a three-month extension to one of the contentious aspects of the post-Brexit Northern Ireland protocol, Irish national broadcaster RTE reported.

London asked Brussels last week for the extension to allow time to resolve a dispute over whether chilled meat products such as sausages, produced in mainland Britain, can continue to be sold in British-ruled Northern Ireland.

The protocol essentially keeps Northern Ireland in the EU’s customs union and adhering to many of its single market rules to avoid creating trade barriers with EU member Ireland and thereby putting at risk the 1998 Good Friday peace agreement.

Meanwhile, Britain has delayed the final phase of its economy’s reopening by a month to July 19, aiming to use the extra time to speed up the country’s vaccination programme.

Sterling has been among the top performing ‘G10’ currencies this year on bets that Britain’s economy will reopen quicker than its peers due to its rapid progress with the COVID-19 vaccination programme. About 80% of Britain’s adult population has now received a first dose.