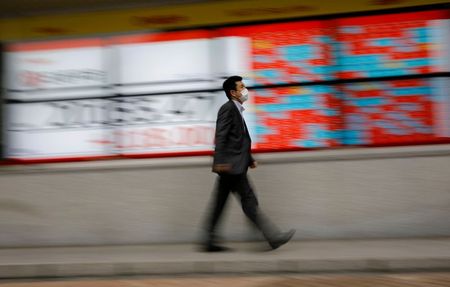 Equity futures pointed to a small bounce in Europe, after a month-end selloff, with Euro Stoxx 50 futures up 0.4%, while FTSE futures rose 0.1% and S&P 500 futures trod water at record high levels and were last up about 0.15%.

In an Asia session thinned by a holiday in Hong Kong, Japan’s Nikkei fell 0.3% and MSCI’s broadest index of Asia-Pacific shares outside Japan fell 0.4%.

“The virus is still playing a role … although it’s difficult to see much direction in anything at the moment,” ING economist Rob Carnell said on the phone from Singapore.

“There’s a broad sense that the dollar isn’t such a bad unit to be holding,” he said, as traders turned to U.S. jobs data due Friday for the next clue on the Federal Reserve’s rates outlook.

“Everyone is a little bit jittery.”

In China, equities cheered the centenary of the Communist Party with a small rise, but a nationalist address from President Xi Jinping in Tiananmen Square did little to soothe geopolitical nerves and the yuan weakened very slightly.

Data in Asia also painted a mixed picture, with Japanese manufacturers’ mood at a two-and-a-half year high, but factory activity slowing down through the region – particularly in Vietnam and Malaysia – on a resurgent pandemic.

Slower vaccination rates in Asia and the extension of restrictions to curb the spread of the virus – as well as a regulatory crackdown on Chinese tech giants – have had regional markets lagging this year.

The MSCI ex-Japan index closed out the first half with a gain of 5.8% compared with world stocks’ rise of 11.4% and a gain of 14.4% for the S&P 500, which logged its fifth consecutive record closing high to end last month.

Market participants will be eyeing euro zone unemployment, a meeting of Sweden’s central bank and appearances from Bank of England Governor Andrew Bailey and from European Central Bank President Christine Lagarde later in the day for trading cues.

However, it is U.S. payrolls on Friday that traders think could jolt markets from a slumber that has locked currencies in some of their tightest trading ranges for decades.

Overnight dollar/yen implied volatility stands at its highest in more than three months.

U.S. private payrolls beat expectations overnight, although they are an unreliable guide to Friday’s broader indicators.

“Unless the monthly jobs report disappoints, the level to beat for the dollar index is the year’s high at 93.4,” analysts at DBS Bank in Singapore said in a note.

The U.S. dollar index, which measures the greenback against a basket of six major currencies, hit 92.483 in the Asia session, its highest since April. The yield on benchmark ten-year U.S. Treasuries was steady in Asia at 1.4696%.

In commodity markets, prices for metals seem to be stabilising below May peaks and oil was edging up toward the multi-year highs touched earlier in the week.