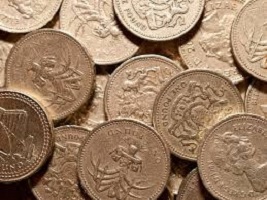 So far, the UK pound has started the day in an assertive mood GMT against the US Dollar, rising to buying $1.459, from beginning the day at $1.454.

The GBP/USD rate has moved in favour of sterling, after the statement from the Federal Reserve, as expected, left its main interest rates unchanged 0.25% to 0.5%.

Although there were strong hints on a possible hike on interest rates in June.

This adds to the recent waves of goodwill towards the pound, including pro-European messages from Barack Obama, and the favourable remain the European Union poll readings, all which have had a hand in the pound’s recent improved performance.

In contrast to this, the UK economy has suffered some negative data, following the recent announcement of the slowdown of growth to 0.4% in the first quarter of this year.

The Confederation of British Industries in their latest distributive trends survey, revealed that retail performances on the high street have fallen to their worst level in the year leading up to April, since January 2012.

The 117 companies who took part in the study, said that that orders placed on suppliers also fell over the year, while sales for the time of year were considered to be average. More positively, sales are expected to pick up next month.

According to the influential Nationwide Building Society, house price growth in the UK in April slowed to 4.9%, in comparison to 5.7% in March, following the surge of property purchases.

The rise was fuelled by buyers avoiding the rise in duties on buying second homes, that came into effect on April 1.

Euro Also Climbs on the US Dollar

The euro has also started the day positively against the greenback, as the EUR/USD rate started the day with the euro buying just below $1.133, and has since leapt up to currently being to the value of $1.135.

Despite the dollar losing ground, Omer Esiner, an analyst with the Commonwealth Foreign Exchange, said that the Federal Reserve’s the tone over the future of the economic backdrop had improved.

The statement eradicated the warnings over the global economic outlook, that was a major part of the March statement.

Employment in Germany Up by 1.2% Year on Year in March

Official figures have released encouraging data on levels of employment in Germany, in March this year compared to a year ago, there were 530,000 more jobs created, an increase of 1.2%.

Month on month, employment numbers were hiked between February and March by 150,000, or by 0.3%, with an jobs upturn in the spring cited as a major reason.

The results of the comparison from February were even more positive, factoring in that the average  increase in the same month over the past five years was 124,000.

Additionally, for the employment figures for all of last year, and for January and February this year, have been recalculated.

The revised figures have shown, that the monthly results produced year on year rates of change, which were 0.1 percentage points higher than the previously calculated results.