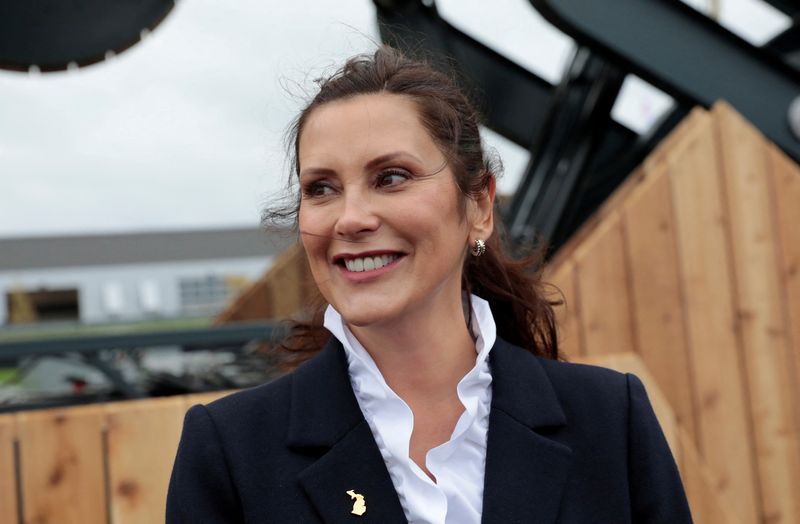 By Tyler Clifford and Brendan O’Brien

(Reuters) – Lawyers for four men standing trial on charges they planned to break into Michigan Governor Gretchen Whitmer’s vacation home and kidnap her at gunpoint said their clients only engaged in idle talk and never conspired to abduct the governor over her COVID-19 mandates.

“There was no agreement. There was no conspiracy to kidnap the governor of Michigan or any other governor,” attorney Christopher Gibbons, representing Adam Fox, said in his opening statement.

Fox is standing trial in a Grand Rapids, Michigan, federal court along with Brandon Caserta, Barry Croft Jr. and Daniel Harris on charges of conspiring to kidnap the Democratic governor in 2020.

All the defendants except Caserta are also charged with knowingly conspiring to use weapons of mass destruction against persons or property. If convicted by a 12-person jury, the men face the possibility of life in prison.

In their opening statement, prosecutors told the jury they would offer evidence that would prove the men planned to break into Whitmer’s vacation home, hog-tie her and take her away at gunpoint to stand trial on treason charges over her COVID-19 mandates.

“To accomplish that, they would shoot, blow up and kill anybody who got in their way, in their own words, creating a war zone here in Michigan,” Assistant U.S. Attorney Jonathan Roth said.

Prosecutors are expected to rely on the testimony of two witnesses, Ty Garbin and Kaleb Franks. Indicted along with the four defendants by a grand jury in December 2020, both struck plea deals with prosecutors and agreed to testify against the defendants. Garbin is currently serving a six-year sentence, while Franks is awaiting sentencing.

A total of 13 men, some of whom prosecutors said were associated with an anti-government militia group known as Wolverine Watchmen, were arrested in October 2020 and charged with state or federal crimes in the alleged kidnapping conspiracy. Seven of them are facing charges in state court.

Julia Anne Kelly, an attorney for Harris, said the evidence would show her client was unaware of any plans to kidnap the governor.

“He liked to talk about drinking and girls and guns,” Kelly said. “He was not perfect in the summer of 2020. But he’s not done what the government has accused him of.”

The FBI said it began tracking the group’s movements after seeing online discussions that included posts about the violent overthrow of some state governments to end curbs on social and business activities imposed to control the coronavirus.

The indictment accuses one or more of the defendants of discussing Whitmer’s kidnapping and planning to meet in Wisconsin to train with assault rifles. The posts also discussed buying supplies to be used in the kidnapping and putting Whitmer’s vacation home under surveillance.

Fox ordered $4,000 worth of explosives from an undercover FBI agent posing as a co-conspirator, the indictment said. It also said Fox and Harris made payments for the explosives in the following weeks.