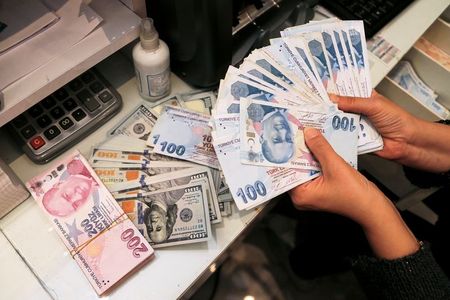 The currency had already hit record lows last week after the Turkish central bank (CBRT) cut its policy rate by 200 basis points, despite rising inflation, in a shock move derided as reckless by economists and opposition lawmakers.

The lira hit an all-time low of 9.75 by 18:40 GMT on Sunday, weakening from Friday’s close of 9.5950. Two bankers attributed the early weakness to Erdogan’s comments on Saturday. It has fallen nearly 24% so far this year.

“And we all know that (Central Bank Governor Sahap) Kavcioglu has no mandate to hike rates, so the only defence will be spending foreign exchange reserves the CBRT does not have.”

Erdogan said on Saturday he had told his foreign ministry to expel the envoys for demanding the release of businessman and philanthropist Osman Kavala, who has been held in prison for four years without being convicted.

By Sunday evening, there was no sign that the foreign ministry had yet carried out the president’s instruction, which would open the deepest rift with the West in Erdogan’s 19 years in power.

Erdogan’s political opponents said his call to expel the ambassadors was an attempt to distract attention from Turkey’s economic difficulties, while diplomats hoped the expulsions might yet be averted.

Turkey’s state banks were expected to cut borrowing costs on loans by around 200 basis points on Monday, according to three people with knowledge of the plan, following last week’s central bank rate cut.