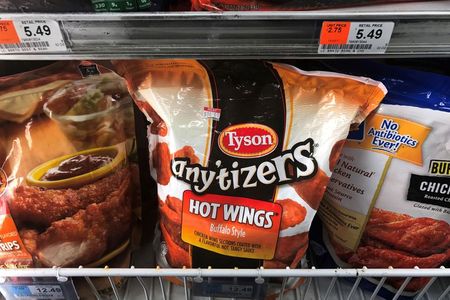 Higher raw material costs have led U.S. meat producers to raise prices, while demand recovers after an easing of pandemic-led restrictions on dining out.

“We’re seeing substantial inflation across our supply chain, which will likely create margin pressure during the back half of the year,” he said.

Tyson said for the second quarter ended April 3, sales rose about 4% to $11.30 billion from a year earlier, exceeding forecasts from analysts, who were on average expecting $11.19 billion, IBES data from Refinitiv showed.

In beef, Tyson’s largest business, sales rose 1.7% from a year ago to $4 billion, as prices climbed 7.5% and volumes fell 5.8%. Tyson said it now expects its beef division to post improved fiscal 2021 results compared to last year.

Shares in Tyson, which are up 22% this year, were around 3% lower following the results.

(Reporting by Praveen Paramasivam in Bengaluru and Tom Polansek in Chicago; Editing by Shounak Dasgupta, Shinjini Ganguli and Alexander Smith)