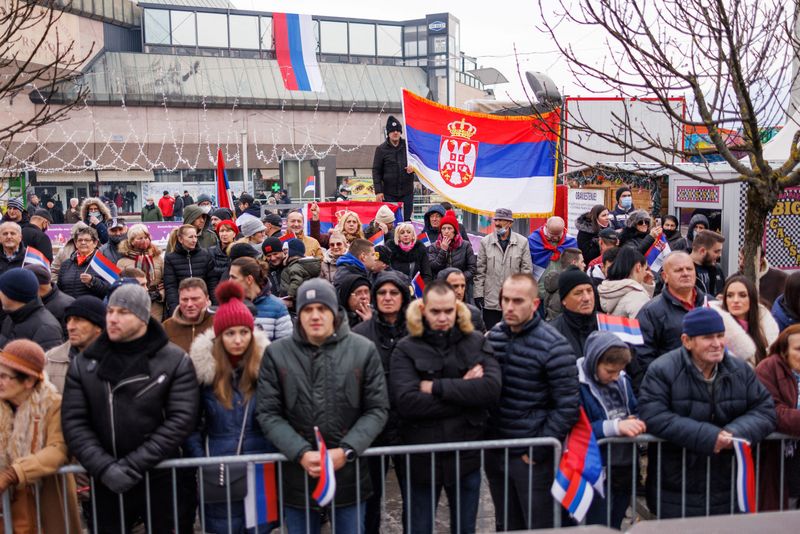 WASHINGTON (Reuters) – The United States on Tuesday urged Bosnia and Herzegovina authorities to investigate reports that banned ceremonies by the Serb Republic last weekend glorified war criminals and targeted returnees to towns from which non-Serbs were expelled.

“We urge competent authorities to investigate these incidents without delay and to hold the responsible individuals accountable,” a State Department spokesperson said in a statement.

On Jan. 9 Bosnian Serb leader Milorad Dodik, who has ramped up secessionist rhetoric, presided over celebrations of the day in 1992 when Bosnian Serbs declared independence, igniting a war in which 100,000 people were killed.

“The United States is deeply concerned over reports of hate speech, glorification of war criminals and provocative incidents targeting returnees in the Republika Srpska entity over the weekend,” the spokesperson said.

The ceremonies coincide with the Serbian Orthodox Christian holiday. It was this religious component that led Bosnia’s Constitutional Court to declare the holiday illegal as it discriminated against Catholic Croat and Muslim Bosniak communities.

The celebrations included a march by armed police through the main Bosnian Serb city of Banja Luka. Videos posted on social media showed participants singing songs celebrating the war, including one listing towns where non-Serbs were massacred and expelled.

Chinese and Russian diplomats and officials from neighboring Serbia attended the commemorations.

While Russian and Chinese representatives “saw fit to participate in the destabilizing ceremonies,” the United States donated 96,000 doses of COVID-19 vaccine to the central government on Tuesday, the spokesperson said.

On Monday, the European Union said the Bosnian Serb leadership risks sanctions https://www.reuters.com/world/europe/stop-secessionist-rhetoric-or-face-sanctions-eu-tells-bosnian-serb-leaders-2022-01-10 and a loss of aid should it continue to incite tensions.

Washington last week sanctioned Dodik for “destabilizing and corrupt activities and attempts to dismantle” the 1995 U.S.-brokered deal that ended the war. The accord created an independent country divided into the autonomous Serb Republic and a federation dominated by Bosniaks and Croats.