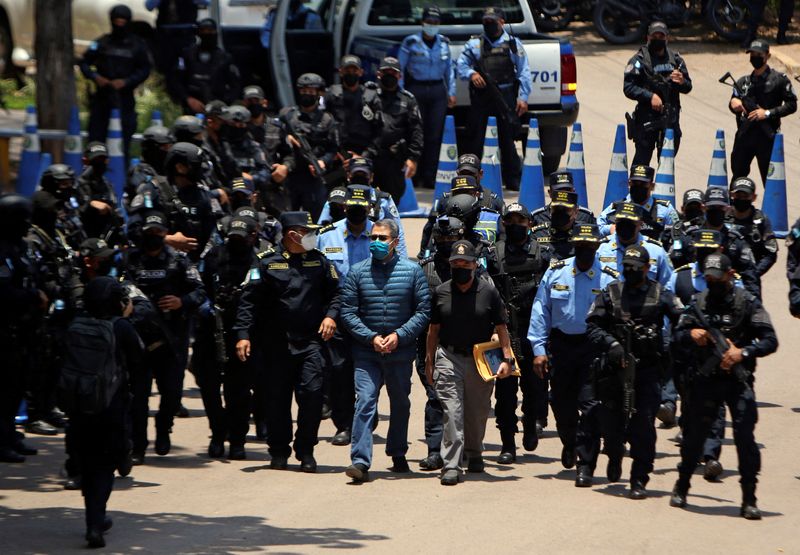 By Kanishka Singh and Luc Cohen

WASHINGTON/NEW YORK (Reuters) -The U.S. government on Thursday unveiled charges against former Honduran President Juan Orlando Hernandez of participating in a cocaine-importation conspiracy and related firearms offenses, and he was extradited to the United States.

The indictment unsealed by the U.S. Justice Department marked a stunning fall from grace for the former Washington ally who led the Central American nation from 2014 to January 2022.

Federal prosecutors in Manhattan said Hernandez received millions of dollars from drug trafficking organizations, including from the former leader of Mexico’s Sinaloa cartel, Joaquin “El Chapo” Guzman, and used those funds to enrich himself and finance his political campaigns.

In exchange, Hernandez and other Honduran officials provided drug traffickers with protection from investigation and arrest, gave them access to law enforcement and military information and prevented their extradition to the United States, according to an indictment.

“Hernandez abused his position as president of Honduras from 2014 through 2022 to operate the country as a narco-state,” U.S. Attorney General Merrick Garland told reporters in Washington. “Hernandez worked closely with other public officials to protect cocaine shipments bound for the United States.”

Hernandez was a key ally to the United States during the Obama and Trump administrations on immigration and anti-narcotics operations. But U.S. prosecutors revealed in court filings last year that Hernandez, 53, was under investigation as part of a sprawling probe into Honduras’ bloody narcotics trade.

President Joe Biden has focused on tackling corruption in Central America since taking office in January 2021, with an eye toward stemming the tide of migrants from the region to the United States.

Hernandez’s younger brother, Tony Hernandez, a former Honduran congressman, was sentenced to life in prison in the United States in March 2021 after an earlier conviction on drug trafficking charges.

The former president had strongly denied the allegations, arguing that captured traffickers smeared him to exact revenge against his government and to reduce their sentences. But he has pledged to cooperate with authorities and has portrayed himself as a fierce opponent of drug trafficking.

In the Honduran capital Tegucigalpa, the handcuffed ex-president was escorted to the airport by a phalanx of security forces. Around the airport, dozens of people gathered waving the country’s blue and white flag to celebrate Hernandez’s extradition.

Hernandez departed aboard a U.S. Drug Enforcement Administration (DEA) plane on Thursday afternoon and was expected to make an initial appearance in Manhattan federal court in the coming days.

“If you turn the power of the state into a violent drug trafficking machine, if you allow violence and murder to flourish at the hands of the cartels, then the DEA will stop at nothing to hold you accountable,” DEA Administrator Anne Milgram told reporters.

The indictment was filed on Jan. 27 – the day Hernandez was replaced by leftist Xiomara Castro following her November victory over Nasry Asfura, the candidate from Hernandez’s right-leaning National Party – but kept sealed until Thursday.

The U.S. Department of Justice generally refrains from indicting sitting heads of state.

“The new administration of Honduras wants our help,” Garland said. “There’s no conflict between our doing this kind of work and having good relationships in Latin America.”

Honduran police detained Hernandez in mid-February following a U.S. extradition request, according to a U.S. Embassy document seen by Reuters at the time.