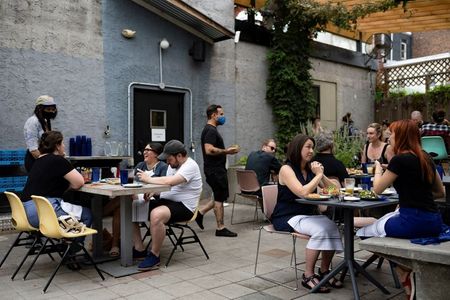 “The deceleration in economic activity was largely attributable to a pullback in dining out, travel, and tourism in most Districts, reflecting safety concerns due to the rise of the Delta variant, and, in a few cases, international travel restrictions,” the Fed reported in its latest Beige Book compendium of anecdotal information about the economy.

Still the document, summing up information collected through Aug. 30 that will be part of the deliberations at the Fed’s Sept. 21-22 policy meeting, reported continued strong demand for workers and hiring made more difficult by “increased turnover, early retirements, childcare needs, challenges in negotiating job offers, and enhanced unemployment benefits. Some Districts noted that return-to-work schedules were pushed back due to the increase in the Delta variant.”

Jobs openings were so plentiful, the Atlanta Fed noted, that restaurants were beset by “ghosting coasting,” where employees take a job for few days then quit with no notice and move on to the next restaurant.

“Inflation was reported to be steady at an elevated pace,” with Fed districts saying it was either moderate or strong, with costs for metals, freight, construction materials and other industrial staples rising in most districts.

“With pervasive resource shortages, input price pressures continued to be widespread,” the Fed reported, causing headaches across industries as disparate as beer brewing and wedding apparel.

“One contact reported refunding several bridal parties because dresses did not arrive on time for weddings,” the Richmond Fed reported. In the St. Louis Fed district “a regional brewery reported that their supplier increased prices twice between order and delivery for a pallet of aluminum.”

The report describes a difficult landscape for the U.S. economy and the Fed heading into a fall season when it was hoped the recovery from the pandemic would take clearer shape.

The risks of sustained price increases remains real, rather than fading as quickly as Fed officials had hoped.

On the other hand “all Districts continued to report rising employment overall,” possibly alleviating concerns that weak job growth of just 235,000 new positions in August was the edge of a broader slowdown in employment given the spread of the coronavirus Delta variant. Analysts had expected in excess of 700,000 new jobs last month.

HOPING FOR MORE CLARITY ON JOBS

Fed officials are grappling with when to reduce their $120 billion in monthly bond purchases as a first step in a coming shift to post-pandemic monetary policy, and while a decision remains likely this year the August job reading may require further confirmation that hiring will stay on track.

“The Delta variant is weighing on consumer spending and jobs, and the pace of growth appears to be slowing,” New York Fed president John Williams said Wednesday.

“I will want to see more improvement” in the labor market before deciding the economy is ready for the Fed to trim one of its signature pandemic programs, Williams said.

“It could be appropriate to start reducing the pace of asset purchases this year,” Williams said, but concluded “it’s clear that the pandemic is far from over, both in terms of its effects on health and its effects on the economy.”

New data released Wednesday showed the strength that had been building in the jobs market through the summer, with a record 10.9 million job openings in July. That eclipsed the number of people unemployed and left some officials convinced hiring will remain strong and allow the Fed to begin its bond “taper” soon.

“There is plenty of demand for workers and there are more job openings than there are unemployed,” St. Louis Federal Reserve president James Bullard said in an interview published Tuesday in the Financial Times.

Reports from the Fed’s districts indicated that the August slowdown in job creation may have been driven more by trouble matching workers to positions at a wage they would accept rather than ebbing demand for new employees.

Even as the consumer and business services sectors “deteriorated somewhat,” the San Francisco Fed reported, “labor shortages have severely reduced capacity at some hotels, airlines, and restaurants, with one hotel in the Mountain West having to close off several floors due to a lack of housekeeping staff.”