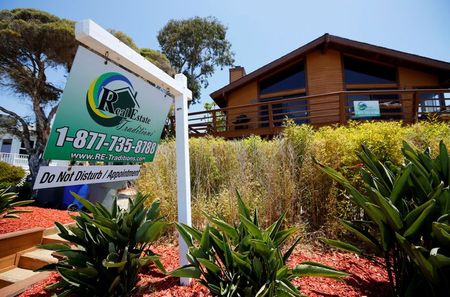 Still, prices remain high enough to keep some potential buyers from a hot housing market. The report from the National Association of Realtors on Wednesday showed the smallest share of first-time homebuyers in more than 2-1/2 years and houses continuing to be snapped up typically after only 17 days on the market.

“The recent moderation in existing home sales reflects some easing of the buying frenzy that carried over into early 2021,” said Mark Vitner, a senior economist at Wells Fargo in Charlotte North Carolina. “The frantic race for space sent prices soaring. We continue to expect the housing market to move back into balance over the next couple of years.”

Existing home sales dropped 2.0% to a seasonally adjusted annual rate of 5.88 million units last month. Sales fell in all four regions, with the densely populated South posting a 3.0% decline. Economists polled by Reuters had forecast sales would decline to a rate of 5.89 million units in August.

Single-family sales fell 1.9%, while condo/co-op sales dropping 2.8%. The decrease in sales coincided with a recent change in consumer attitudes towards buying a home.

Home resales, which account for the bulk of U.S. home sales, fell 1.5% on a year-on-year basis. The annual comparison was distorted by the pandemic-driven surge in sales in August 2020. Sales are up 16% so far this year compared to the same period in 2020 and remain well above their pre-pandemic level.

The housing market boomed early in the coronavirus pandemic amid an exodus from cities as people worked from home and took classes online, which fueled demand for bigger homes in the suburbs and other low-density areas.

The surge, which was skewed towards the single-family housing market segment, far outpaced supply. Expensive building materials as well as land and labor shortages have made it harder for builders to boost production. At the same time, some homeowners are reluctant to sell because of concerns they might not find something affordable, keeping inventory tight.

Though the pandemic tailwind is fading, demand for housing remains strong thanks to near record low mortgage rates and rising wages from a tightening labor market. A separate report from the Mortgage Bankers Association showed a modest rise in applications for loans to purchase a home last week.

Mortgage rates could rise after the Federal Reserve on Wednesday cleared the way to reduce its monthly bond purchases “soon” and signaled interest rate increases may follow more quickly than expected.

Stocks on Wall Street were trading higher, recouping some of the recent losses as concerns over a default by Chinese property developer Evergrande eased. The dollar fell against a basket of currencies. Prices of longer-dated U.S. Treasuries rose.

The median existing house price increased 14.9% from a year ago to $356,700 in August. That is a deceleration from a 23.6% jump in May. The slowdown in house price inflation adds to anecdotal evidence that some sellers are reducing their asking prices. Realtors are also noting that bidding wars are subsiding.

“We expect home price growth to slow further over the balance of this year and through 2022 as the housing inventory shortage eases and demand moderates,” said Scott Anderson, chief economist at Bank of the West in San Francisco.

Sales remained concentrated in the upper price end of the market, with transactions of homes in the below-$250,000 price range continuing to experience double-digit declines.

August’s sales decline implies lower broker commissions. This together with the drop in housing starts suggests a further decrease in residential investment this quarter.

There were 1.29 million previously owned homes on the market last month, down 13.4% from a year ago. At August’s sales pace, it would take 2.6 months to exhaust the current inventory, down from 3.0 months a year ago. A six-to-seven-month supply is viewed as a healthy balance between supply and demand.

In August, properties typically remained on the market for 17 days, unchanged from July, but down from 22 days a year ago. Eighty-seven percent of the homes sold last month were on the market for less than a month.

“There is a suggestion here in the moderation of price gains and sales, and a declining share of first-time buyers, that a considerable portion of the stock adjustment of demand for homes to low rates and pandemic-driven population moves has taken place,” said Conrad DeQuadros, senior economic advisor at Brean Capital in New York.