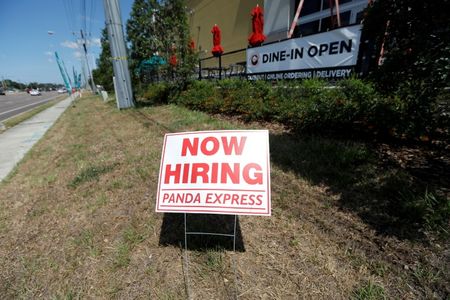 U.S. producer prices increased more than expected in July, the Labor Department said on Thursday, suggesting inflation could remain high as strong demand fueled by the recovery continues to hurt supply chains. In the 12 months through July, the PPI jumped 7.8%, a record high since the measure was introduced in 2010.

The producer price index for final demand increased 1.0% last month after rising 1.0% in June. Three-quarters of the gain was driven by a record one-month increase in final demand services, while the goods advance was half what it was in June.

The report followed data on Wednesday that showed U.S. consumer prices increases slowed in July even as they remained at a 13-year high on a yearly basis amid tentative signs inflation has peaked as supply-chain disruptions caused by the pandemic work their way through the economy.

“We expect the July report to mark the peak of producer price inflation as supply pressures gradually unwind in the coming months and demand moderates from its blistering pace in the first half of the year. However, stubborn pandemic disruptions will continue to hamper supply through year-end,” said Mahir Rasheed, an economist at Oxford Economics.

The recent pace of price increases has intensified debate at the U.S. Federal Reserve over whether faster action may be needed in dialing back its extraordinary support of the pandemic-hit economy, including beginning to reduce its $120 billion in monthly bond purchases.

Fed Chair Jerome Powell has repeatedly said the current burst in inflation is likely temporary but other officials have become increasingly wary price increases will persist above the central bank’s 2% inflation target, a flexible average.

Last month’s increase in the costs of services was led by a 1.7% jump in trade services, which measure changes in margins received by retailers and wholesalers. Twenty percent of the increase in services was due to margins for automobiles and parts retailing, which rose 11.2%.

There were also gains in the prices of airline passenger services, hospital outpatient care, machinery and equipment wholesaling, and traveler accommodation services.

The swiftness of the economic recovery has caused a mismatch between supply and demand. Producers have had to grapple with low inventories, higher commodity prices, a global shipping container crisis and increased labor costs due to a shortage of willing workers.

The lack of inventory because of supply chain issues are making it easier for producers to pass on the costs to consumers.

Elsewhere, initial claims for state unemployment benefits fell 12,000 to a seasonally adjusted 375,000 for the week ended August 7, a separate Labor Department report showed on Thursday. Data for the prior week was revised to show 2,000 more applications received than previously reported.

Economists polled by Reuters had forecast 375,000 applications for the latest week. Unadjusted claims, which offer a better read of the labor market, decreased 5,198 to 320,517 last week.

Claims remain well above their pre-pandemic level of 256,000, though they have dropped from a record 6.149 million in early April 2020.

There are still fears that rising coronavirus cases, caused by the Delta variant, could slow the employment recovery amid a shortage of workers. There were a record 10.1 million job openings at the end of June. About 8.7 million people are officially unemployed.

The claims report showed the number of people continuing to receive benefits after an initial week of aid fell 114,000 to 2.866 million during the week ended July 31.

Those collecting benefits under the Pandemic Unemployment Assistance and Pandemic Emergency Unemployment Compensation programs dropped by nearly 730,000 in the week ended July 24. At a combined 8.67 million, their rolls were the lowest since May 2020.

The labor market recovery has a long way to go. About 12.055 million people, the same as the prior report, were receiving unemployment checks under all programs in late July, the lowest level since late March 2020.

The economy has swiftly regained momentum and past its pre-pandemic peak in the second quarter as trillions in government relief and increasing vaccinations against COVID-19 fueled spending on goods and services.