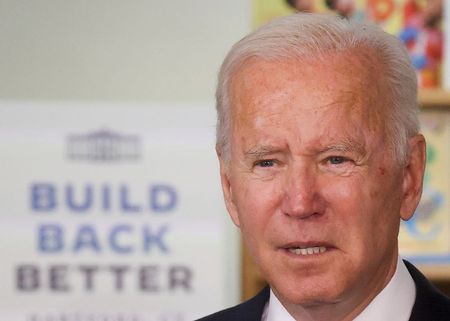 Following a broad review launched shortly after Biden took office in January, the U.S. Treasury Department unveiled a revised framework intended to take a more surgical approach to sanctions instead of the blunt-force method favored by his predecessor, Donald Trump.

The Treasury warned that countries reducing the use of the U.S. dollar and exposure to the U.S. financial system could erode the effectiveness of sanctions, while digital currencies and other technological innovations also pose a risk to the tool’s success.

While seeking to turn the page on the Trump era, the new policy prescriptions offered few specifics on how the Biden administration could change its handling of sanctions against major targets such as Iran, Venezuela and China.

Treasury Department officials promised more rigor would be added to the sanctions process while also modernizing the tool through the new framework, which seeks to tie designations to clear policy objectives and emphasizes the importance of multilateral coordination and mitigating humanitarian impacts.

The new guidelines also advise that Treasury should invest in building its technological capabilities and workforce as part of the effort to counter the threat from digital currencies.

“The key for us is making sure that we’re in a place where sanctions can be as effective as possible, and that means addressing the fact, the truth, which is that the technology is making it easier for people to look outside of the traditional U.S. financial system,” a senior Treasury official told reporters.

Treasury officials made clear on Monday that sanctions would remain a crucial part of U.S. foreign policy. The Biden administration has aimed for a much more targeted use of the tool while still keeping up pressure on Venezuela, Iran and other countries under U.S. sanctions.

“Treasury’s sanctions review has shown that this powerful instrument continues to deliver results but also faces new challenges. We’re committed to working with partners and allies to modernize and strengthen this critical tool.”

But so far Biden’s approach, while continuing to inflict economic damage on sanctions targets, has been no more successful than Trump’s efforts at forcing U.S. foes and rivals to bend to America’s will.

While keeping in place many of Trump’s sanctions programs, Biden made some changes since taking office.

He removed sanctions that Trump placed on officials of the International Criminal Court and held off on sanctioning European entities involved in construction of the Nord Stream 2 natural gas pipeline from Russia despite pressure from Republican lawmakers.

Biden has also offered to ease sanctions on Iran if it returns to compliance with a 2015 nuclear deal that Trump abandoned – though indirect negotiations between Washington and Tehran have been stalled for months.