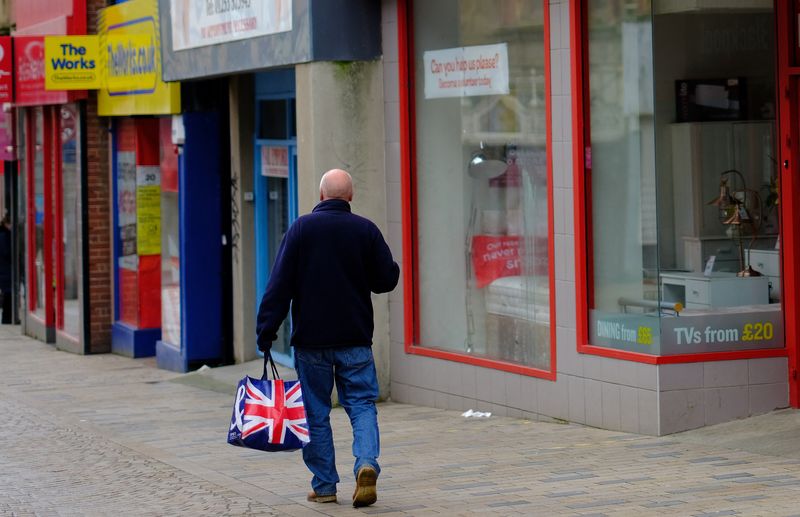 LONDON (Reuters) -British retailers reported a better January for sales than this time last year, when COVID-19 lockdowns kept shoppers at home, but they still judged it as a disappointing rebound, a survey showed on Thursday.

A net balance of +28% of retailers reported an increase in sales this month compared with January 2021, the Confederation of British Industry said, up from +8% in December.

But almost a third of retailers said sales turned out poorly for the time of year, compared with fewer than a tenth who said they were strong. With a net balance of -23%, it marked the worst reading for sales judged by seasonal standards since March 2021, when non-essential shops were closed due to lockdown.

“It was not surprising that retail sales dropped back below seasonal norms in January, given the spread of Omicron, the reintroduction of restrictions late last year and increased consumer caution,” said Ben Jones, lead economist at the CBI.

Other data published on Thursday painted a more upbeat picture of the economy at the start of 2022.

Credit and debit card purchases, as measured by the Bank of England’s CHAPS interbank payments system, rose to 87% of their February 2020 level in the week to Jan. 20, up from 85% the week before – although this does not adjust for seasonal variation. [L8N2U7370]

Jones said retailers would be approaching the rest of 2022 with caution.

Annual consumer price inflation hit an almost 30-year high of 5.4% in December and the Bank of England thinks inflation will peak at around 6% in April.

The CBI survey was conducted between Dec. 22 and Jan. 18 and was based on replies from 42 retail chains.