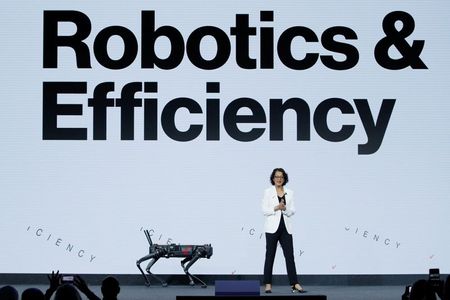 Edge computing uses augmented reality and machine learning to analyse bulk data where it was gathered – whether factory floor, oil rig or office space – and requires fast data transfers of the kind that only high-speed 5G signals provide.

“When you have more than one robot on the floor, you run into a problem, as these are still just machines, and they can’t naturally communicate with one another,” Verizon’s Chief Strategy Officer Rima Qureshi said at the event in Barcelona.

“5G will make it possible for robots to connect with other robots and devices of all kinds in a way that simply wasn’t possible before,” she said.

Connected, smarter robots are considered crucial to making areas such as factory floors more efficient through automation, with remote monitoring cutting costs and the need for plant infrastructure.

As part of the demo, Qureishi beckoned at the stage’s wings and two robots emerged: one dog-like robot called Gigi – after 5G – that walked stiffly on four legs, and a second boxy bot named Mekeal – a nod to mobile edge computing, or MEC – which rolled in on traction wheels.

To train the robots to become aware of their environment beyond a two-dimensional route that cannot account for elements beyond origin and destination points, Qureishi said engineers had jumped in front of them, sent other robots in their path and thrown boxes in their path.

“I’m happy to report that neither engineers nor robots were harmed in the process,” Qureishi said.

The market for the global 5G in the cloud is expected to reach $10.6 billion by 2028, growing at 79.2% annually, Research and Markets stated in a recent report.

Verizon is also working on connected drones that could be deployed at locations hit by natural disasters, avoiding putting a human in danger and controlled by a single operator from hundreds of miles away, with live video and thermal imagery available to anyone in the world.

With 4G networks, drones were able to fly into U.S. fire zones without on-site personnel and to send data, almost in real-time, to staff 4,000 miles away, but with 5G, Qureishi said, drones could stream panoramic video to multiple recipients, who could each focus on different aspects of the image simultaneously.

(Reporting by Supantha Mukherjee and Clara-Laeila Laudette in Barcelona; Editing by Bernadette Baum)