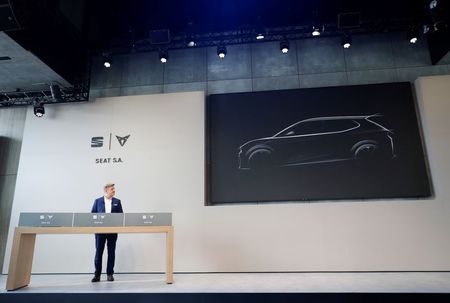 Wayne Griffiths confirmed that SEAT plans to launch an urban electric vehicle in 2025, which it wants to produce at its plant in Martorell, outside Barcelona.

Spain’s industry minister said on March 4 that the country will use European Union funds to create a public-private consortium with SEAT and power company Iberdrola to build the country’s first factory for electric-car batteries, but did not specify where it would be located.

Griffiths said authorities would need to confirm their support to stimulate demand for electric cars, significantly improve charging infrastructure and support the development of car and battery production facilities.

“If we want a car by 2025, we need to make these decisions quickly this year,” Griffiths told a press briefing, adding he was confident of securing an agreement with the Spanish government.

Spain is due to receive some 140 billion euros ($166.98 billion) in EU pandemic recovery funds by 2023, almost half in grants. It plans to channel a large chunk to financing major industrial projects that will help resuscitate and modernise its beleaguered economy.

If SEAT’s electric plan goes ahead, the company plans to produce over 500,000 urban electric cars a year from 2025 at Martorell, including models for other brands in the VW stable, such as Volkswagen, Skoda and possibly Audi, Griffiths said.

He said it was less relevant where a battery-cell factory – the prior step before assembling the batteries – would be located and said that had not yet been decided.

“This year we must return to profitability,” Griffiths said.