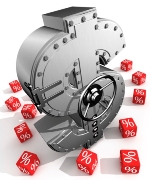 We all know that interest rates are eventually heading higher. It might be in 2014, but more likely not until 2015, when the unemployment rate can decline to 6.5% as the Federal Reserve believes.

But one thing for sure is that interest rates are headed higher. (Read “Small-Cap Stocks the Place to Be—If Economic Growth Is Real.”)

The best way for an investor to take advantage of the situation is to concentrate on big bank stocks.

According to FactSet, the financials will lead the pack in the upcoming second-quarter earnings season, with earnings expected to rise a healthy 17.7%. (Source: “Earnings Insight,” FactSet Research Systems Inc. web site, June 21, 2013.)

The reason why the bank stocks will fare well when rates rise is that they will be able to generate higher revenues from loans as the interest rate-spread widens. That’s how bank stocks make money.

And once the bank stocks return to their original routine of paying out good dividends, they will attract more retail and institutional investors.

And don’t be afraid; bank stocks are much stronger now following the cleaning up and restructuring of the banking sector after the sub-prime credit crisis. Bank stocks can once again be added as long-term holdings.

Recall the bank stress tests by the Federal Reserve earlier this year. As a result of the stricter requirements, bank stocks are more defensive to risk and much improved as far as their balance sheets, liability, and vulnerability to dire market conditions.

The stress test assumed the worst-case scenario for banks and in all, 14 of the 18 banks managed to pass with conditional approval, with The Goldman Sachs Group, Inc. (NYSE/GS) and JPMorgan Chase & Co. (NYSE/JPM) expected to also be approved by September.

Now we’ll see if some of the banks will be allowed to raise their dividends back above two percent. If this happens, we could see a corresponding rise in the demand for bank stocks.

The reality is that the bank stocks have so far provided excellent leadership this year.

The other area that you should watch in spite of higher interest rates is the industrials sector.

Take a look at some of the companies in the Dow Jones Industrial Average, such as The Boeing Company (NYSE/BA) and General Electric Company (NYSE/GE).