The MIB had a fairly quiet session on Wednesday as the market continues to find support above the 15,000 level. This should continue to support the market, and as such we think we are simply stuck between 15,000 and 16,500.

Investing in the markets beyond core Europe is a difficult thing to do at this moment in time, and as such illegal continue to have a little bit of a drag on its indices. Looking forward, we need to break out of this range in order to place a longer-term trade, and we think that if 15,000 manages to get broken down, we could fall much quicker. As for going long, it is a little bit messier up top, but we feel a strong move above 16,500 would bring in the long-term buyers.

Milan saw a slight increase during the session after first falling on Tuesday. Right now, it looks as if this market has significant support at the 15,000 level, as such we are not willing to sell at this point time. If we managed to break the highs from the Tuesday session however, we would be willing to take a small long position in this futures market.

The longer this European debt crisis drags out, the more complacent people seem to get about the prospects of some type of meltdown. Because of this, these peripheral indices will occasionally get a slow grind higher as the fear creeps out of the market. This is what we believe is happening currently, and as such do expect to see higher prices.

Milanese stocks rose during the session on Monday, as the 15,300 level continues to offer support. The MIB certainly looks like it’s range bound with an upward bias at this point time, but the fact is that it is going to be difficult to be long of Italian stocks while the bonds start to increasing yield in that country. The cousin this, we are avoiding the MIB at this moment in time, but think eventually we should get some type of clear signal in the vicinity of 15,000.

If 15000 gives way to the sellers, we think that this market could fall significantly. It is because of this that we are watching this marketplace very carefully, but truthfully we just simply do not traded much. It needs to be a situation where it only has its finances in order to get us to become aggressive traders, but we do understand the fact that if this market let’s go, we could see a significant fall and we certainly would be willing to take advantage of it. 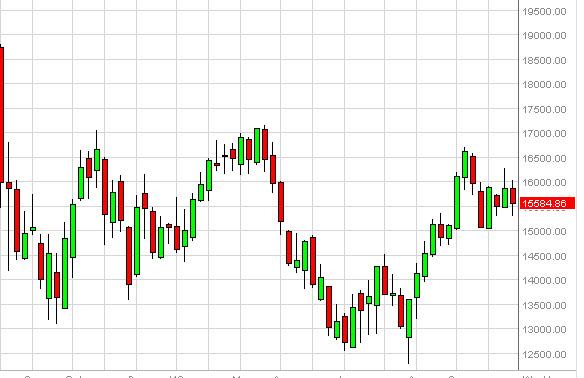 Trading the European periphery will be very difficult going forward until there is some type of solution to the debt crisis. If and when Spain asked for the inevitable bailout, it’s very likely that this market will continue higher. However, until that happens more than likely going to be a short-term traders market at best. 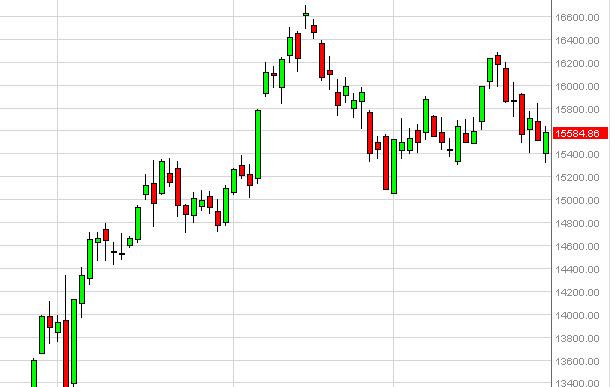 The Milanese index rose during the session on Friday in order to bounce from the 15,400 level. We actually see the major support being down 15,000, so were somewhat in the middle of “no man’s land.” With this in mind, we don’t necessarily see a decent trade set up at this point time, and would actually welcome a is fall back to the 15,000 level in order to look for support, and a more obvious trade.

To the upside, we have quite a bit of resistance going all the way to the 16,600 level. With this in mind, we do need to see a fall and some type of support in order to start buying again. If we managed to break the 14,800 level, we would be more than willing to start selling aggressively in the futures market.

The MIB fell during the session as the 15,500 level was tested for support. We are currently in the middle of a larger consolidation area, so we aren’t necessarily pressed to be in this market one way or the other. Also, we are not big fans of being long of the periphery in Europe right now, and as such we are more than willing to be on the sidelines.

The Milanese markets fell during the session on Wednesday in order to test the 15,500 level again. The level held as support, and we did get a small bounce from it. However, one has to look at this chart and admit that the most recent high is lower than the one before it. Because of this we are a bit leery of going long Italian stocks right now, but would not hesitate to if the Spanish finally asked for a bailout. In this particular scenario, we think that Italian banks will do quite well, and by extension this futures contract. Until then, we are very leery of going long in the periphery of Europe.

The MIB futures index fell during the session on Tuesday, as did all European indices that we watch. The market is currently sitting at the 15,500 level, an area of great support. It is because of this that we believe the Italian markets are probably most likely supported better than many of the other indices in Europe. The 15,000 level is absolutely crucial out, and if it does not hold, we could fall much further perhaps all the way down to 13,000. We will look for supportive candles in the 15,000 area, in order to go long. However, if we do not get that and we fall further, we would become aggressively short.

The MIB futures market fell during the session on Monday as did most European indices and index futures. The 16,000 level is now above, and this looks like a market that willing to flow back down to the 15,000 level. There should the some serious support at that level, but the truth is that we will more than likely drift lower until we hit it. Because of this, we are bearish of malign and the stock on its index, and will continue to be so until 15,000 is retested for support. With all of the issues going on in the periphery of Europe, Italy included, it’s hard to believe that this market will become overly bullish anytime soon. 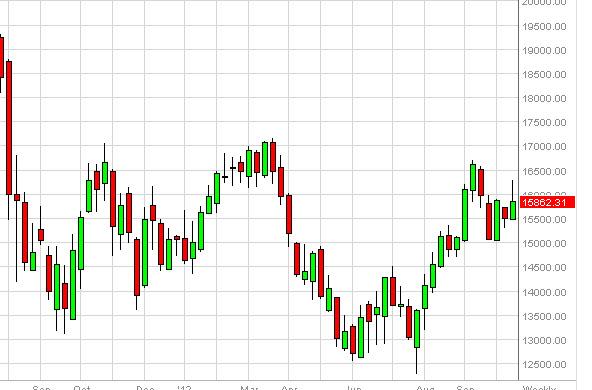 The MIB Index had a relatively strong week for the first half, only to selloff in the very end. The resulting candle is a shooting star, and it is just under previous resistance at the 16,500 level. However, this looks more congestive than bearish to us, and as such we think that the 15,000 level will offer quite a bit of support.

Looking below that however, if we get below the 15,000 level we think this market will go much lower, probably as far as 13,000 or so. Certainly there are a lot of problems in the Italian economy right now, and as the Europeans doddle with the debt crisis, it’s very possible that we will see some type of punishment from the market aimed at the European Union.

Looking at this chart, it is most certainly a bearish downtrend, and possibly a bit of consolidation over the last year or so. Nonetheless, this makes the 17,000 level very important as it has been tested twice and failed both times. In fact, as far as a long term trade is concerned, we would be much more comfortable buying this market above the 17,000 level as it is such an obvious spot on the chart to pay attention to. Nonetheless, that simply will not be able to happen until we see some type of solid solution for the European debt crisis – something that is probably far away from this point time.

Financials will be hit the hardest, but industry will do poorly as well. As a general rule, we believe that the European stock markets on the whole offer value; you have to be very careful as to which stocks you choose. In much the same way that the Americans had a year or two ago, we have a situation in Europe where household names of the only stocks you can be trusted at this point. In a world of economic uncertainty, Italy is probably not where you want to be and we believe this chart does show that.

The MIB had a very weak session on Friday as we crashed back through the 16,000 level. This market did find a bit of support at the very end of the session now, which would make sense as this area we had closed in was previous resistance. The 15,850 level should be minor support, and now we need to see what the market will do next. Quite frankly, we believe that this market could easily drift down to the 15,000 level as it is a much more significant area on the chart. With this being said, we are avoiding Italian stocks for the time being.

The Milan index had a subtle, yet strong day as the market crossed the 16,000 level. This market is currently trying to break above overhead resistance, and it seems as if it is gaining a bit of momentum as time wears on.

Looking at this index, it does seem that Italian stocks are primed to go much higher. We have had a fairly wicked pullback recently, but as you can see we have wiped out most of those losses. Also, it should be noted that the pullback occurred after an extremely strong month of August in this market.

This in mind, we are looking to buying this market in general, and Italian bank stocks as well as other high beta names. However, we would like to see some type of pullback as we are so close to a massive resistance area. Once we get that, we will be more than willing to buy supportive daily candles.

The Italian index had a strong session on Wednesday as the recent consolidation level was overtaken by the buyers. The 16000 level gave way, and as such it looks like we are going to go much higher in this market. This is more than likely predicated upon the idea of the Spanish asking for a bailout soon, and as such we think that this market could continue higher as long as there is no firm denial from Madrid.

We will buy on pullbacks, focusing mainly on banks and higher beta names like that. Remember, the European Union has been a virtual minefield for banks lately, and many of them are knee-deep in Spanish government bonds. If the Spaniards get bailed out, this can only help out banks across the continent. Needless to say, Italian ones will be any different.

The Milanese Index rose during the Tuesday session in order to break through several resistive candles over the last week or so. The move was impressive as it broke through several shooting stars, and parked at the 15,960 level. The area is the site of the previous gap, but it has been filled recently, and we suggest that perhaps it won’t be the barrier that many would suspect.

Judged upon the last couple of moves in this market, we suspect that Italian stocks will do well in the coming weeks. Obviously, with the Tuesday candle closing at the very top of the range we suspect that Wednesday should be a fairly decent day barring some type of headline shock.