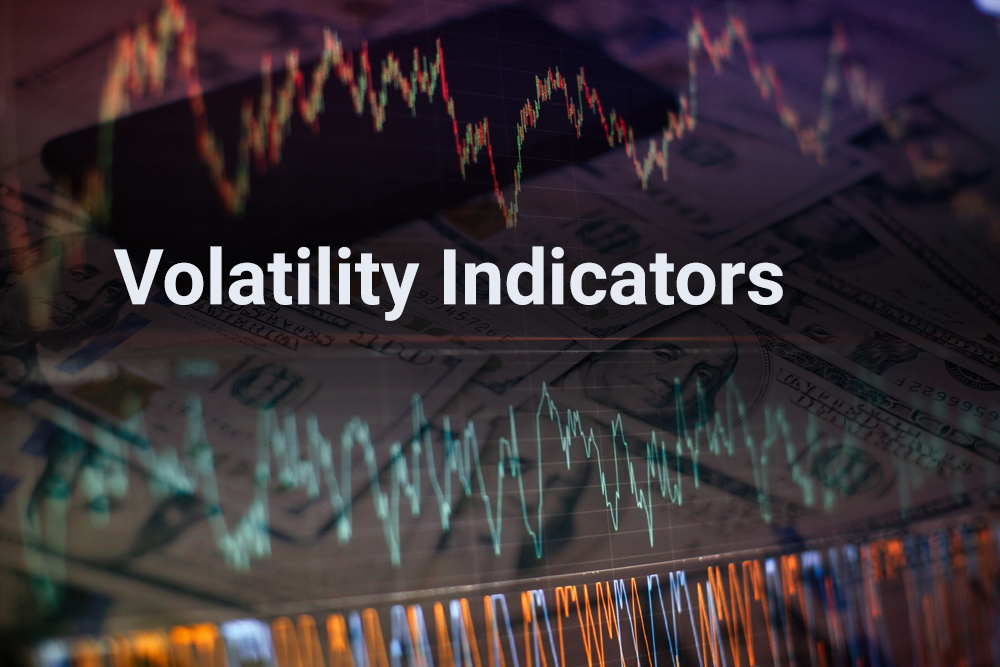 The volatility indicator is a technical tool that measures how far security stretches away from its mean price, higher and lower. It computes the dispersion of returns over time in a visual format that technicians use to gauge whether this mathematical input is increasing or decreasing. Low volatility generally refers to quiet price movement, with predictable short-term swings, while high volatility refers to noisy or dramatic price movement, with often wildly unpredictable short-term swings.

Volatility measures the degree to which price moves over time, generating non-directional information unless the data is plotted in specific visual formats. This technical element has a great impact on options pricing and market sentiment, with high volatility generating greater extremes in greed and fear. Constructed as an indicator, volatility plots a history of price movement that supplements trend, momentum, and range analysis.

Volatile instruments are considered to be more risky than non-volatile instruments. Volatility oscillates regularly between high and low states, offering a potential timing tool for traders and market timers. Specially, the lowest volatility over X periods is often a precursor for an imminent shift to high volatility that translates into trend movement and trading signals. Market lore outlines these classic dynamics, telling market players to ‘buy in mild times and sell in wild times’. 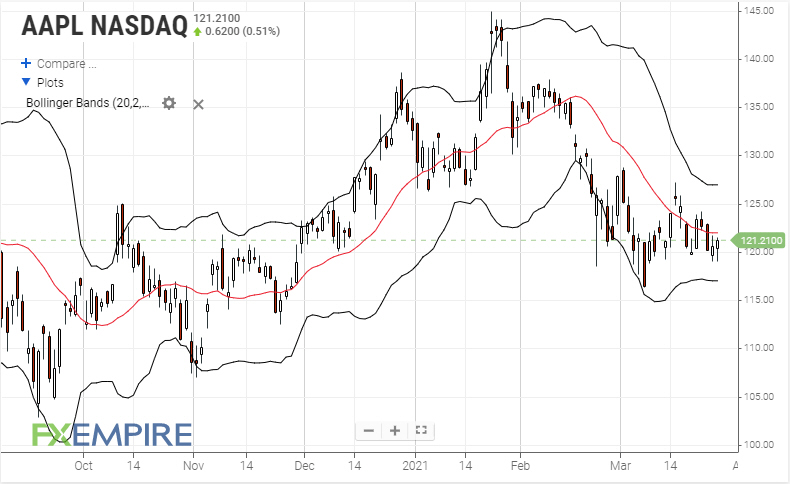 Bollinger Bands is the financial market’s best-known volatility indicator. Created by John Bollinger in the early 1980s, the indicator constructs three lines around price: a simple moving average acts as the middle band while equally-distanced upper and lower bands expand and contract in reaction to changing volatility. The 20-day or period SMA is the most common setting for the middle band but this value is customizable in the advanced charting program.

The calculation takes the standard deviation of the SMA, which is one way to calculate distance from the SMA over time, and applies the result to the upper and lower bands. Bands expand and contract over time in reaction to changing volatility levels. Constricted bands ‘squeeze’ price action between narrow boundaries, indicating low volatility while predicting a cycle shift to high volatility. The transition can elicit high odds entry and exit signals for many trading strategies. 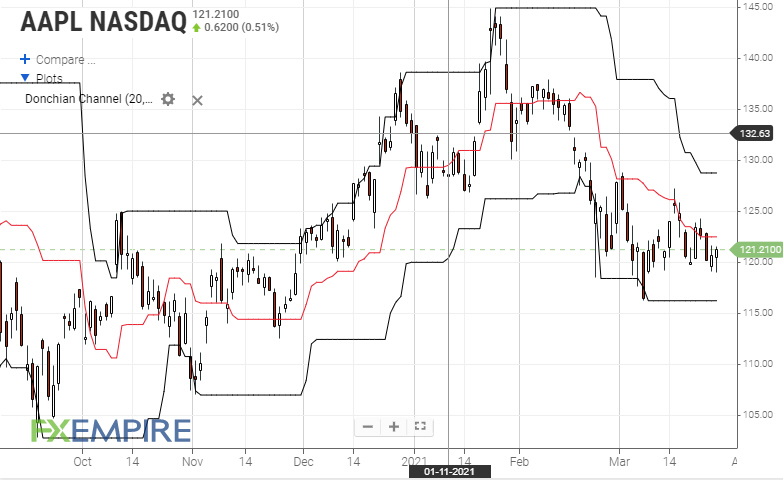 As with Bollinger Bands, 20-days or periods is the most common Donchian Channel setting.  A top band that moves higher when price approaches (or a bottom band that moves lower) signals ease of movement that facilitates trend development. Conversely, a band that remains horizontal when price approaches identifies support or resistance that raises odds for a reversal and return to the median band. Bollinger Bands differ from Donchian Channels, applying moving averages that lower the impact of high and low outliers during lookback periods. 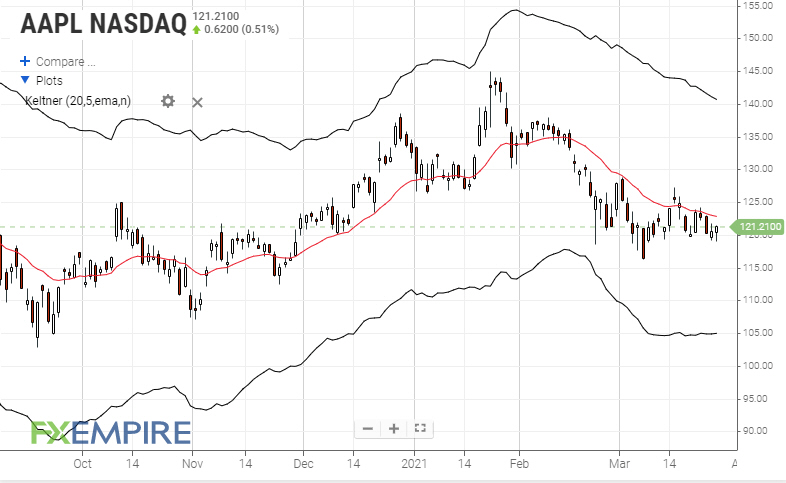 Keltner Channels place bands around developing price in order to gauge volatility and assist directional prediction. Upper and lower bands are calculated as a multiple of average true range (ATR) and are plotted above and below an exponential moving average (EMA). Both the EMA and ATR multiplier can be customized but 50 and 5 are common settings. Price lifting into the upper band denotes strength while price dropping into the lower band denotes weakness.

These bands represent support and resistance regardless of inclination, with piercing through bands generating overbought and oversold trading signals in addition to marking an acceleration of the trend. Horizontal bands exert greater support or resistance than bands ticking higher or lower.  Price falling into a rising band generates a bullish divergence while price rising into a falling band generates a bearish divergence. 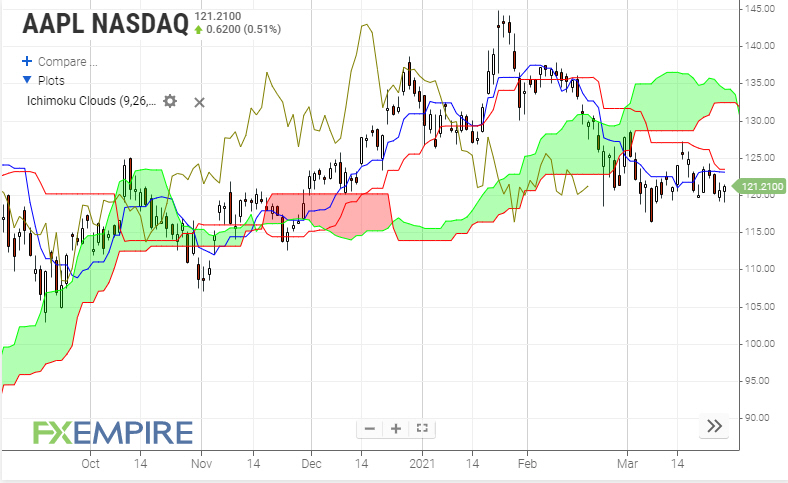 Ichimoku Clouds, developed by Goichi Hosada in the late 1960s, plots multiple moving averages above and below price in the form of shaded areas that are called bullish or bearish ‘clouds’. Five calculations are applied to construct the indicator, generating a cloud that represents the difference between two of the lines. Price above a cloud signals an uptrend while price below a cloud signals a downtrend. A bullish price swing into a cloud denotes resistance while a bearish price swing into a cloud denotes support.

Clouds also tick higher or lower over time, adding to the indicator’s versatility. Trend signals are expected to be stronger and more reliable when price is moving higher above a cloud or lower below a cloud. The two cloud lines are called ‘Span A’ and ‘Span B’. The cloud is colored green when Span A is above Span B and colored red when Span A is below Span B.  Price above a red cloud signals a bullish divergence while price below a green cloud signals a bearish divergence. 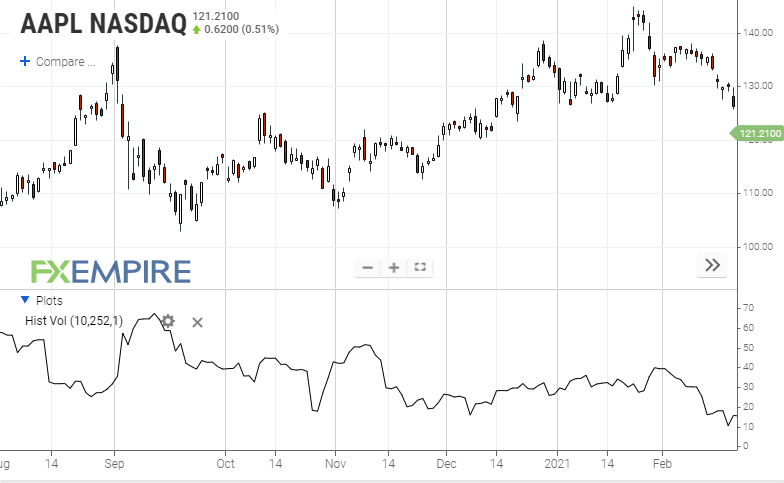 Historical Volatility is plotted in a separate pane, unlike most volatility indicators. It measures the distance that price travels away from a central mean over the chosen time period. Standard deviation is often used to calculate the indicator but variations utilize other measurements. Risk increases when the indicator rises and decreases when it falls. It is non-directional, meaning that rising or falling volatility doesn’t specifically favor buying or selling strategies.

The original indicator applied a 10-period and 252-day setting to measure volatility over a year (252 = average number of trading days in a year). The technician now customizes these inputs as well as standard deviation (SD). It’s best to ‘form fit’ the calculation to a security because average volatility is expected to differ between different types of instruments and markets. Interpretation of historical volatility compares current levels with prior levels, looking for high and low extremes that may impact profits and losses. It can also be useful to compare values across highly correlated instruments to uncover ‘typical’ value and hidden divergences.

Beta – measures a security’s volatility compared to the broad market or another security.

Bollinger %b – translates the distance between price and Bollinger Bands into an oscillator plot.

Choppiness Index – measures whether a market is engaged in a trend or a trading range.

Donchian Width – measures the price difference between the high and low bands of the Donchian Channel.

Fractal Chaos Bands – draws bands around price action, with the slope determining whether or not the security is trending or flat.

Moving Average Deviation – measures volatility by examining how an asset’s price has deviated from the selected moving average over time.

Moving Average Envelope – plots a band over price, with top and bottom extremes calculated as a pre-chosen percentage above and below a moving average.

Prime Number Bands – identifies the highest and lowest prime numbers in a trading range over a given period and plots the output as a band across price.

Relative Volatility – is a variation of Relative Strength Index (RSI) that measures the direction of volatility over the specified time period, using standard deviation calculations.

Standard Deviation – examines how far price stretches away from a central mean price over time.

STARC Bands – also known as Stoller Average Range Channel Bands, are plotted above and below a simple moving average, highlighting extreme levels that can elicit potent buy or sell signals.

Ulcer Index – predicts the drawdown, depth, and duration of asset declines through examination of highs and lows over time.