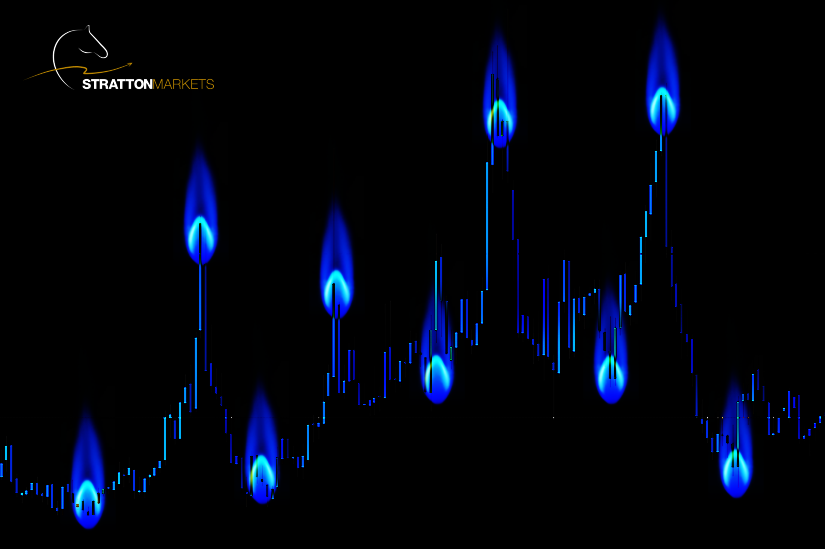 And bringing with it high volatility in the markets. But what I really want to know is: How normal a 51% ($1.70) monthly increase in Natural Gas price is?

So how do we explain the madness that’s taking over Natural Gas price?

One quick analysis of the past 15 years of Natural Gas charts will reveal that until 2009, large movements in its price of up to $6.40 were somewhat of a norm. In fact, in February 2003, Gas prices were pushed this way to the staggering quotation of $11.90. This was then topped by the historically high $15.78, in December 2005.

The good times for Natural Gas large intraday movements ended with the last uptrend from July 2008, settling at $13.69. Past this moment of high volatility, Natural Gas prices seemed to have toned down a notch, becoming more appealing for long-term investments, as it settled in a channel between $1.61 and $6.36.

But why the $9.50 drop during July 2008 and August 2009? As surprising at it might seem, market analysts blamed it on the US recession and that Natural Gas storages had reached a record high. This led to a decrease in demand from factories and homes. Weather conditions along with a large increase in domestic production, during the years before 2009, didn’t help much in stabilizing or supporting the prices.

What is happening with the big Natural Gas players?

Before rushing to conclusions, we might want to check the status of the largest players from the Natural Gas industry.

It might not take you by surprise, but the largest Natural Gas producer is in fact Russia, with its publicly listed Gazprom. The Russian Natural Gas producing company is accountable for approximately 12% of the whole world production, with about 36 billion cubic feet daily. Their plans for the moment regard large expansions, giving no signs of drawbacks in production.

The second largest Natural Gas producer in the world is the New York Stock Exchange (NYSE) listed company, Exxon Mobil Corp. It became one of the biggest global companies in any industry, producing about 1.2 billion cubic feet of Natural Gas per day, according to investopedia.com.

So, how do you think the tensions of three of the world’s greatest powers – with the US in a Trade War with China and pulling from the Nuclear Weapons Pact with Russia – could impact the Natural Gas price?

What could we expect next?

We know that Natural Gas can be triggered by: weather conditions, competition, crude oil prices, supply and demand, transport, storage, geopolitical events along with the trends of the currencies it’s being traded against.

From the charts, we can see that during the months of June to January, there was a large increase in Natural Gas demand – mostly due to its use for both ACs cooling and heating. Between February and March, the Natural Gas price slowdown can be assigned to a substantial increase in storage and most likely different weather than anticipated.

If we’re to follow previous years’ movement in Natural Gas prices, at the moment we are in the middle of the seasonal demand increase. It might be safe to assume that if external factors won’t interfere, Natural Gas price might continue to increase, until the break of spring.