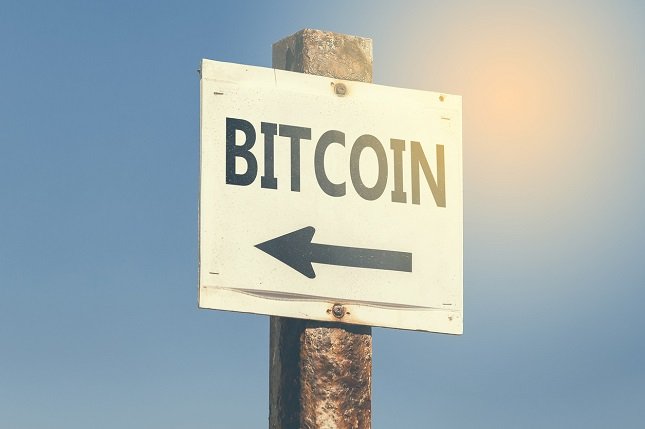 Just when investors thought Bitcoin prices were about to go into orbit, it seems to have hit another bump in the road. It was quite a big hole – and this week had many nervous investors running for cover. We think it is safe to come back out now.

In last week’s commentary, I mentioned we may see a retracement to the previous levels of support of around $5,600 and to treat this as a buying opportunity for those who missed out in previous weeks since the rally in September.

As we can see from the chart, in the top circle, bitcoin reached the $8,000 mark, but it may have overstretched itself, and fell back to just above $7,000. The intent is there but until more investors are behind it, the force behind the momentum does not seem to be sustainable.

The bottom circle shows, quite clearly that the price bounced off of the 55-day simple moving average (gold line), which we find to be the first point of key support in any retracement scenario. Since then the price has bounced back upwards, and there is every reason to think it will keep doing so, having established support around the $5,600 area in previous weeks.

In the middle circle, the blue, 21-day exponential moving average line has, of course, stalled. This is now the new resistance line to be breached if bitcoin is to continue its previous trajectory to the $10,000 level.

In the “worst case scenario,” should bitcoin fall below both the $5,600 support level, and the 55-day simple moving average, the next major support level is at $3,600 and even this is below the psychological $5,000 level.

Given the volatility of this cryptocurrency, $3,600 is not an impossible forecast but it is very unlikely that bitcoin will fall through all of these major areas of support. We see any fall back reaching the 55-day simple moving average and the $5,600 level and even the $5000 level as further buying opportunities.

So much for the technicals then – what about the fundamentals?

Interest in cryptocurrencies has never been so widespread or keen as it is at the moment. People who had never heard of bitcoin just a couple of weeks ago are speaking avidly of it as the next “big thing.” More and more clients are asking how they can buy them.

This phenomenon will feed the momentum in the markets and give a good foundation for future growth. The continued acceptance of institutional investors (more, it has to be said, in the blockchain, than in cryptocurrencies themselves) will mean even further credibility is added to the underlying structure, and integrity, of cryptocurrencies, and bitcoin in particular, as the front-runner.

Of course, the cynics will point to the events of this week as a reason to hide from cryptocurrencies.

That bitcoin rallied 11%, trading back above $6,500 in just over half a day, shows volatility and nervousness, following the SegWit2x upgrade to the bitcoin network being called off by the developers. The uncertainty will continue in the upcoming days.

This is still a young, untried, and untested instrument. There is inherent risk in anything as complicated, and new but this is no reason to reject the possibilities out of hand. The blockchain is certainly here to stay and cryptocurrencies will be along for the ride into the foreseeable future.

Collin Plume has over 15 years of experience in high-level financial services. His expertise and proficiency span commercial property, precious metals, and cryptocurrencies. View all posts by Collin Plume