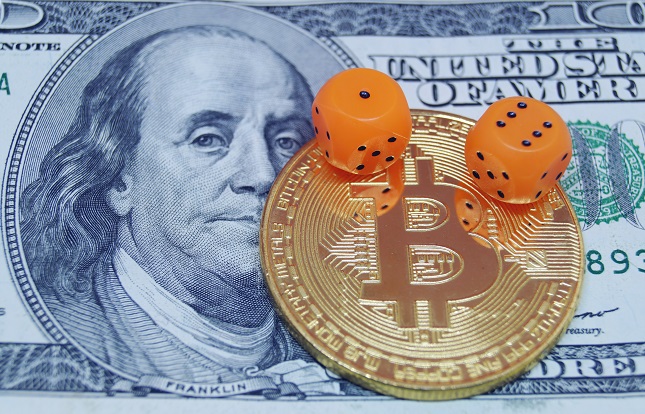 Amongst Bitcoin investors, capitulation is the word of the year. Declining from ~$20,000 to ~$4,000 at the time of this writing leaves speculators wondering if 2019 is a year for the bulls. With Bitcoin being a new, relatively low volume asset class gaining steam, fundamentals play a seemingly exaggerated role with price action, and technical analysis is gradually becoming more reliable.

Generally, capitulation refers to a time when holders are indefinitely committed to holding and panic sellers have cut their losses, forming a true bottom in the market. Using technical analysis, we want to find the support for this bear run.

To find true support, it is important to understand the long-term movement from $1,000 to $20,000. The year 2017 showed this meteoric price increase and prior to this bull run, the price was gradually increasing from $700-$1,000. As seen in the chart below, the entire year of 2017 was a continual, irrational bull run filled with hype and over-valued ICOs, with substantial, original support at $1,000. The volume during 2017 was unprecedented, which means that lots of buyers and new investors were buying in all the way up to $20,000 per Bitcoin. Once Bitcoin broke ~$2,000 there was virtually no resistance – and it showed.

The Ending of the 2018 Bull Market

Throughout the entire year of 2018, the market has yet to find its support. Each day news outlets and influencers have been calling bottoms, but with no avail.

Zooming in closer to at three-month view shows signs that a bottom is finally approaching.

Here we can get a bit more technical. As of November 14th, the price dropped from ~$5,800 to ~$3,800 within 10 days. This is a near 35% dip after experiencing a year-long ~80% price decline for the asset. After hitting a low of $3,288 it bounced back to $4,384 with significant volume. This strong bounce back of over $1,000, coupled with noticeably high volume, is a reliable indicator that sellers have sold, and buyers are ready to buy.  At this time of this writing, Bitcoin is trading at $3,844. Ultimately, if the price breaks below $3,288 again, then there is no reason that we will not see the $1,000 support which was held before the bull run, by core believers.

On the other hand, if this new price point introduces new buyers to the market, then we will most likely stay sideways for at least 6 months. The reasoning behind this is that it should be assumed that there are many holders still holding big losses, waiting to sell along the way up, anywhere from current price back up to $20,000. Only at the point which the price breaks $20,000 can we say there is no resistance, until then, it may be a long road back to the top with resistance at each price point along the way.

While technical analysis plays an important role in predicting Bitcoin’s price, the volatility is so extreme that there is arguably just as much, or more merit to understanding the fundamentals. With some legal clarity, things can turn around quick.

To reiterate, looking at the chart for the years of 2017 and 2018 show a seemingly irrational price increase and decrease. To confirm your beliefs, it was irrational, the price increase was mostly based on lots of hype and investors treating Bitcoin like a lottery ticket. ICOs were raising billions of dollars, and investors were putting no thought into their investments.

Reasons for the Price Decline

ICOs are initial coin offerings where project issue tokens in exchange for Bitcoin or Ethereum, primarily. Whether ICOs were ill-intentioned or not, many proved to be unsuccessful in finishing their product. As a result, many projects are selling the funds raised back to fiat. In doing this, the fiat value of Bitcoin will decline. It is assumed that even ICOs which raised Ether during their crowdsale could easily have sold Ethereum to Bitcoin, then back to USD for greater liquidity and less impact on price. With billions of dollars sent to unsuccessful projects, many of them are liquidating and moving on with their lives.

Now, the positive effect of this is that crypto investors are more mature and cautious with their investments. ICOs are still happening and they are an excellent way to raise funds. The industry is now focused more on actual adoption, practical usability, and experienced teams. Ultimately, this should bring about a more consistent industry, with more reliable charts and less volatility. The massive hype in the market is gradually becoming a thing of the past.

This was another major disappointment for 2018. Investors and speculators have been hoping for ETFs, tax reforms, and more legal clarity around Bitcoin and cryptocurrencies in general. Due to the instability of Bitcoin’s price ETF proposals have been denied by the SEC. Without an ETF, a majority of equity-based hedge funds and institutional investment firms cannot invest in Bitcoin, despite their clients asking them to include it in their portfolios. These funds are regulated by the SEC, and unless they are an FX or commodity fund, they legally cannot advise or purchase Bitcoin directly. Instead, they must rely on another investment vehicle, such as an ETF, which is a security, to speculate on the Bitcoin market.

The second is taxes and legal clarity. There are significant flaws in how Bitcoin and cryptocurrencies are taxed. Simply put, each trade is a realized gain or loss, whether or not an investor has sold back to USD. This means that if you purchase Ethereum using Bitcoin, then this is a taxable event, owed in USD to the IRS. An investor would then need to sell some of their cryptos to USD, which is another taxable event, simply to pay taxes. These conversions significantly hurt profits for traders.

Additionally, if an ETF is approved in 2019, and taxes favor the trader more, then it is likely that 2019 will have a bull run beyond $20,000 with major institutional money flowing in from banks, hedge funds, asset managers, prime brokerages and high net worth individuals. If this does not happen, then our best bet for a bull run is to rely on the startups building practical, needed products for businesses and retail customers. Until then, it is likely that we will stay sideways with a less volatile year for Bitcoin.