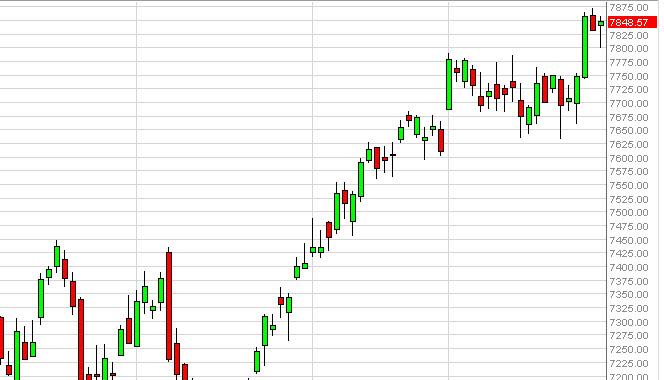 The DAX had a slightly bullish day after originally falling during the Tuesday session. However, you can see that by the candle on the daily chart that we tested the €7800 level for support and found it. This was an area that had been significant resistance previously, and was the site of the breakout on Friday.

The fact that we have pullback and bounced enough to form a hammer makes this even more bullish of the DAX and believe that European indices in general will do well over the next couple of sessions. The FTSE has broken out beyond comprehension, and it must be said that most of the other indices look very similar in Europe right now. With that being the case, it makes sense that they DAX would take off, as Germany is the epicenter of all things financial and productive in Europe itself.

With this being said, we believe that the currency markets are also showing the potential move as well. After all, the Euro is about the breakout against the US dollar at the 1.35 level, an area that if overcome could lead to a massive move higher. This shows that a lot of money is starting to move back into Europe, and without a doubt most traders and investors will be looking to Germany first, and then to the peripheral countries.

As long as the currency moves are too dramatic, we believe that the DAX should continue to grind higher. Granted, if the Euro appreciates too quickly it could be damaging to corporate earnings, but in reality over time we believe that a higher Euro As Well as a higher DAX should be the norm. After all, the DAX is one of the favored indices around the world for traders.

As for selling this market, we would find it impossible to do until we got below the last cluster of support, somewhere around the €7600 level. Because of this, we think this is a “buy on the dips” type of market now, and we would not only do that but we would be buying a break of the highest from the Tuesday session as well.