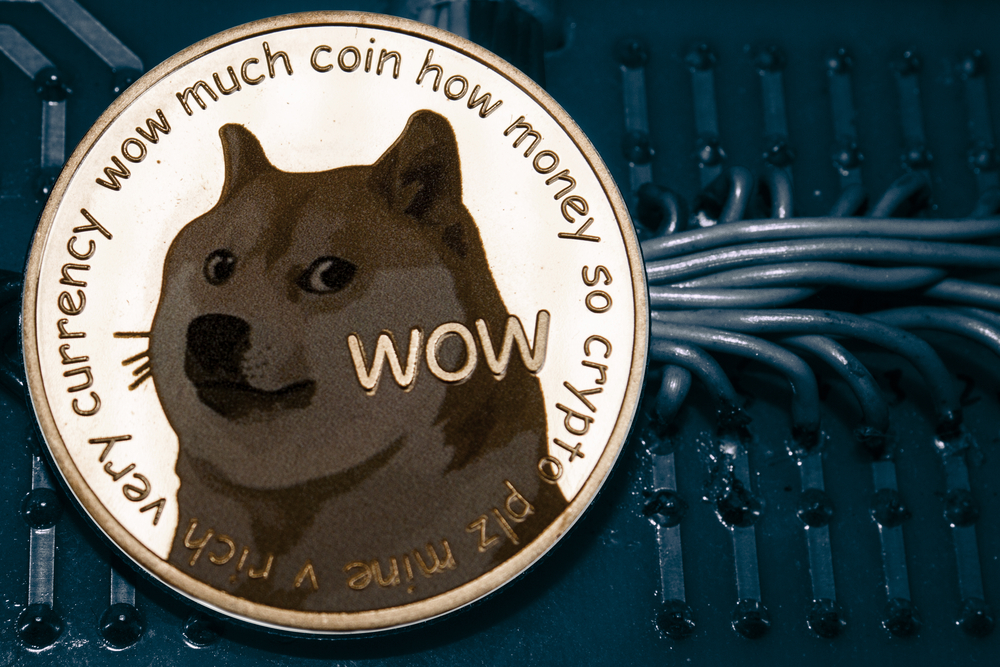 Dogecoin has experienced high price volatility like any other cryptocurrency. To be precise, it has leaped about 774 percent year to date against the US dollar. In July 2020, the cryptocurrency jumped from 0.002286, almost doubling to $0.004543 within a few days. Additionally, Dogecoin’s bullish movement started the year on a high note, doubling from $0.005405 to $0.011427 on January 2.

A Journey to new highs

On February 8th, 2021, the price of dogecoin hit the highest price of $0.082605. The bullish movement has pushed the market cap to $10.7 billion. The trend has now retraced to what seems like a minor pullback. However, we can’t be ruled out a full reversal.

Currently, the price is hovering around the previous high of $ 0.051793 reached in January 2021. The price could retest this high, which would then become our support. While the price is currently in a downtrend, it is prudent to wait and see how the price will behave around this point.

While we can’t predict dogecoin’s price with utmost certainty, it is prudent the most likely direction. Apparently, the coin started a joke, or rather to satirize the proliferating dubious crypto coins. But its growth has not been any joke. Currently, it ranks 10th globally. The rise from $0.000232 in 2013 to the current price of 0.05 represents a 21000% rise.

Recent endorsement from high-profile individuals has swayed the “joke” cryptocurrency. Elon Musk’s series of tweets is one of the highest drivers of the dogecoin price increase. Gene Simmons also recently revealed that he owns DOGE while snoop posted an altered album, Snoop Doge. If the celebrities continue this infatuation of dogecoin, then its price will continue to increase.

The bullish movement of the dogecoin will continue through April. According to Tradingbeasts’ Dogecoin Predictions, at the beginning of April, dogecoin is likely to reach $0.0595023. The minimum price will be around $0.0509205, while the maximum is expected to gravitate towards 0.0748831. At the end of the month, the price is expected to reach $0.0599065.

Like the rest of the years, bulls will still be in control in October through December. The price is expected to reach a high of $0.079470 in October, jump to $0.0798154 in November. More bulls are likely to join the bandwagon pushing the price to test the resistance zone in December. Dogecoin will trade for at least $0.087006 towards the end of the year.

The fears of missing out and the generally bullish sentiment regarding cryptocurrencies will keep pushing the prices up. In other words, more investors are likely to continue buying dogecoin, pushing prices even higher. According to the trading beast forecast, Dogecoin will open the year at a $0.0954633 maximum price and trade at a minimum of $0.0649150. The price will close at $0.1 price in May 2023, which represents a 55.75% change. Dogecoin will reach $0.1096323 on the higher side and $0.0745500 on the lower side at the close of the year.

In 2024, dogecoin will be trading above the $0.11 mark on the higher side. If the price falls, it will find support at the $0.075 price level. Towards the end of the year, the minimum price will increase to 0.846257. On the higher side, the cryptocurrency will cross $0.12 in September and continue the bullish movement to close the year at a maximum price of $0.12444.

The Dogecoin price movement on charts is a mixture of bullish candles and a ranging market. Around mid-February, the dogecoin chart formed a descending triangle followed by a stable trend. If the price breaks the resistance, we could see price movement upwards. A break to the downside could slump to a $0.045 zone. This zone has support from a previous price gap.

Dogecoin price is expected to be bullish all through up to 2025. The charts will have an uptrend to trade over the $0.12 mark, although the typical l ups and downs will be present. One of the most promising aspects of fundamental analysis is the growing popularity among A-list celebrities.

For instance, Elon Musk’s tweets have significantly affected the price of dogecoin. Besides his dogecoin memes, he has announced himself as the unofficial CEO of dogecoin. Similarly, Gene Simmons said he would be buying the currency. But that is not all. Rapper Lil Yachty has claimed he will invest a significant portion of his wealth on dogecoin.

Another fundamental aspect that will affect dogecoins is government regulation. For instance, Nigeria, the second-biggest bitcoin market in the world, has banned the use of cryptocurrencies. The Indian government is also considering banning cryptocurrencies.

On the bright side, financial giants including JPMorgan, Citi, and Sachs are contemplating establishing crypto custody. What’s more, Payments giants MasterCard is set to unveil a platform that will allow merchants to receive cryptocurrency payments. Visa has also published similar plans.

Cryptocurrencies have experienced seismic growth in the recent past. Dogecoin is one of the cryptocurrencies that have grown significantly. In fact, it has hit an all-time high within the first two months of 2021. The massive support from Tesla’s Elon Musk and other celebrities could boost investors’ confidence. Ultimately, dogecoin is expected to grow in 2021 through 2024.