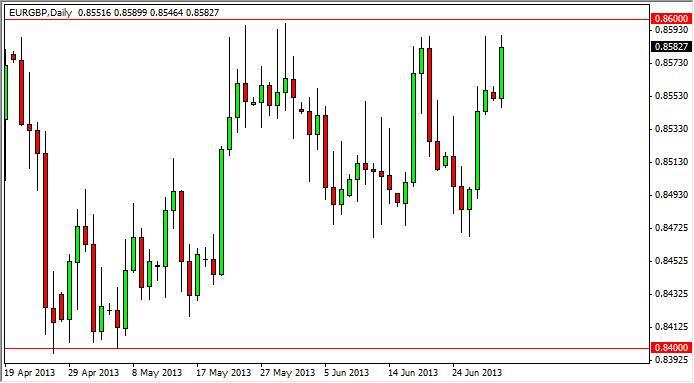 EUR/GBP continued to rise during the Friday session as the shooting star from Thursday got violated. The 0.84 level has been very resistive in the recent past, and as a result it held back the bulls at the end of the day. However, we have seen this happen before, and it will only take a bad story out of Europe to send this pair down.

Fitch downgraded several EU countries in the afternoon and the Euro stayed strong. One of the biggest positives at the moment is the rumor that the Greek debt talks are about to produce a solution. This has been suggested several times in the recent past, but never actually accomplishes anything.

The 0.84 area will be the area to watch as it is serious resistance on the longer-term charts as well. The level should continue to pressure the market, but it must be said the Euro is banging against the level over and over – a sign of strength. However, above the 0.84 level is the even more important 0.85 level and that one will be even harder to overcome.

The Europeans are going into recession, and the British are highly exposed to that fact. The Brits send over 40% of their exports to the EU, and as their biggest customer is slowing down, the UK will as well. This pair will continue to be choppy, but the issues in the EU seem to be bigger than in the UK at the moment. This will continue to give this pair a downward bias overall.

Because of the downward bias, we are looking for selling opportunities. Weak candles will be our signal at the 0.84 level and especially at the 0.85 level if we do in fact manage to break higher to that level. The trend is down, and owning Euros is something that will be very difficult to do in the near term, no matter what the rumors are. The first daily shooting star or large red candle we see, we would not hesitate to sell in this pair.