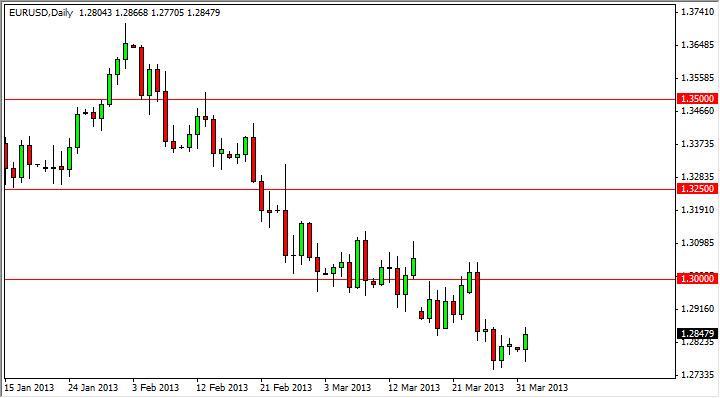 EUR/USD rose slightly on Friday as traders did a bit of profit taking before the weekend. However, the options markets are showing that the net short positions in the Euro are at all-time highs, suggesting that the outlook for the common currency is getting worse. The Moody’s credit agency downgraded Belgium by two notches after the stock markets closed, and this chart doesn’t reflect any possible reaction to this move. The markets are expecting several downgrades in the EU, so it is hard to determine whether or not the Euro will sell off based upon this.

The 1.30 has historically been a big deal, and the fact that it has held shouldn’t be ignored. However, the real target to break through is actually 1.29, as it is the bottom of the support “zone” that is currently holding the Euro up. If we break below that level – 1.25 is almost a certainty at that point. The headline risks out of the EU should continue to plague the markets and all risk related assets are to be treated with suspicion, and this now includes the Euro. The next few weeks will be very low volume, and as a result – the moves could be exaggerated and extreme on headlines. The later in the week we get, the less the volume will be, creating a dangerous environment to say the least.

The outlook for the Euro is going to be heavily tied to these upcoming downgrades. It really comes down to one country: Germany. If the Germans get whacked by the agencies, we could see serious selling in this pair. The Germans are the one piece of the puzzle that everyone still thinks is solid, and if that gives way, there isn’t much left at that point. The next few days will offer many chances for the agencies to do this, so news flow will be even more important in this pair than ever. The selling of rallies is how we are playing this pair, and we will not buy it until we see significant progress in Europe on the debt issues – something that likely won’t happen in the next few weeks.