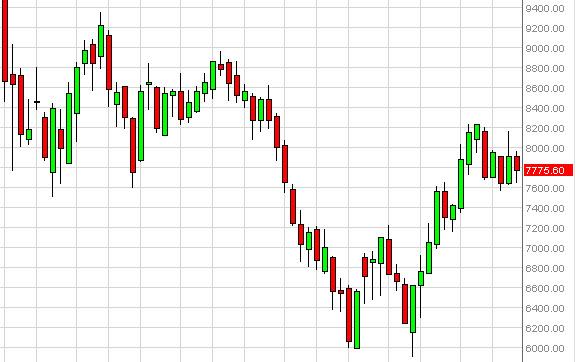 Spanish stocks had a very quiet week as we currently wait to find out whether or not the Spaniards are going to ask for the needed bailout. Right now, it appears that the market is comfortable sitting just below the 8000 level, as we have started to consolidate in a 400 point range. On the bottom, we have 7600 which could be massive support, but we need some type of positive catalyst to get the market going forward.

Looking at this weekly chart, it appears that the range is so tight that is going to be almost impossible to take a long-term position. We need to see the Spanish government ask for the bailout in order to start getting bullish the Spanish stocks again. If they keep dragging their heels when it comes to this, there is a strong chance that we break the 7600 level.

If we break 7600, there is a good chance that we fall to 7000 in relatively short order. In fact, we would be very aggressively short the Ibex via the futures markets if this happens. This will more than likely be predicated upon the markets finally getting sick of waiting on the Spanish to do what is obviously needed. At this point time, it appears that we are basically waiting on pride to be swallowed, so that the world can move on.

Below 7000 we have an area all the way to the 6000 level that could offer support. However, it appears that getting below 7000 will more than likely open up the door down to that very 6000 level. This in mind, it’s hard to imagine that the markets would be doing well anywhere in Europe, and as such we may find ourselves short of several different indices at the same time.

We need to see a breakout of this range between 7600 to 8200 in order to place a longer-term trade, but more than likely it will be an obvious reaction to headlines out of the European Union. More than likely, if it’s negative headlines this market will absolutely come undone.