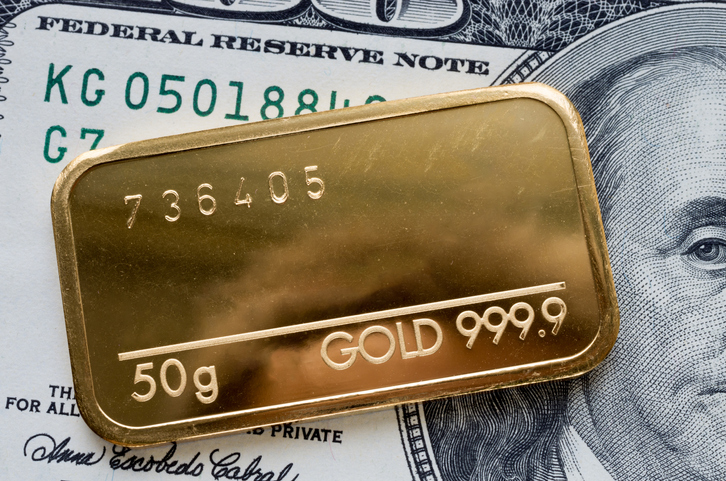 Gold futures are edging higher on Monday as the U.S. Dollar failed to hold onto earlier gains against a basket of major currencies. Slightly lower Treasury yields are also providing some support. Trader are also expressing caution against a slew of U.S. economic data and a speech by Fed Chair Powell later this afternoon. Bank holidays in Japan, China, Australia and New Zealand are likely weighing on the volatility and volume.

The dollar is trading lower against a basket of major currencies on Monday after giving back earlier gains as investors made a cautious start to a week crammed with central bank meetings and big-ticket U.S. economic data, looking for clues on the outlook for global inflation and for policymakers’ response.

The dollar index dropped 2.11% in April, while gold futures jumped 3.45% as a positive view of global recovery prospects lifted trade-exposed currencies at the greenback’s expense.

Central bank policy meetings are scheduled this week in Australia, Britain and Norway. Additionally, traders will get the opportunity to react to a speech by Fed Chair Jerome Powell and a boatload of Fed officials this week.

In Australia, no policy changes are expected on Tuesday although traders will look for a speech by deputy Reserve Bank of Australia Governor Guy Debelle on Thursday night for insight into the bank’s thinking around its bond purchases outlook.

Assert purchases are likewise the focus when the Bank of England meets on Thursday, as well as perhaps an upgrade of its economic outlook, while Norges Bank – which projects hiking rates this year – is expected to stick with its hawkish tone.

Recently, the Bank of Canada signaled that it may begin hiking interest rates before the Federal Reserve. In a move that surprised some investors last week, Canada’s central bank sharply upgraded its forecasts for economic growth and changed its guidance to show it could start raising its benchmark interest rate from a record low of 0.25% in late 2022.

In addition to Fed Chair Jerome Powell’s speech at 18:20 GMT, traders will get the chance to react to the ISM Manufacturing Index for April and construction spending figures at 14:00 GMT.

FOMC Member Williams is expected to speak shortly before Powell at 18:20 GMT. On Friday, Dallas Federal Reserve Bank President Robert Kaplan on called for beginning the conversation about reducing central bank support for the economy, warning of imbalances in financial markets and arguing the economy is healing faster than expected.