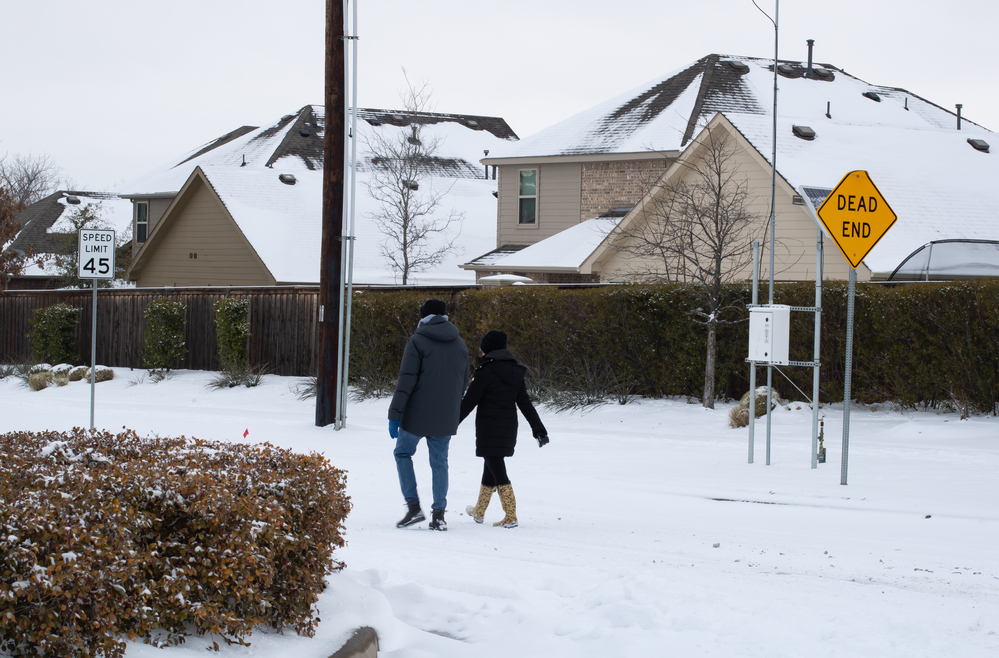 The below summary highlights futures positions and changes made by hedge funds across commodities, forex, bonds and stock indices up until last Tuesday, February 16. A week that saw the S&P 500 reach a fresh record high despite emerging unease about a rising bond yields. The 12 bp jump in US 10-year real yields triggered another exodus out of gold with reflation demand instead moving into cyclical commodities that look set to benefit from tightening supply and a post-pandemic growth sprint. The dollar yoyo-ed but ended the week close to unchanged resulting in no major position changes by speculators.

Bullish bets on 24 major commodity futures remained unchanged at record levels and since the early November vaccine announcements and Biden win, the market has increasingly been pricing in the prospect for higher growth and rising inflation. These developments together with signs of tightening fundamentals in grains, industrial metals and oil have increasingly been raising expectations of a new commodity super cycle. As a result the speculative length has since early November 2020 surged by one-third and last week it reached 2.8 million lots, representing a nominal value of $144 billion. 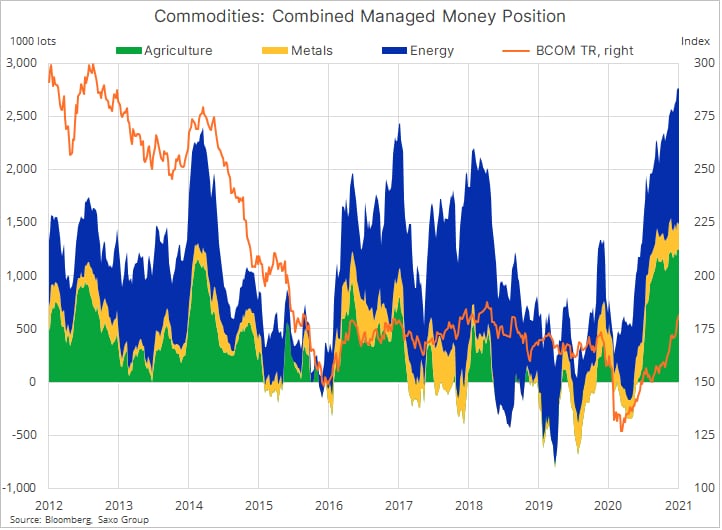 The combined net-long in WTI and Brent crude oil reached 737k lots, the biggest bet on rising prices since October 2018. The combination of OPEC+ keeping supplies tight and weather related supply disruption in Texas helped attract continued buying of WTI crude oil while Brent was kept unchanged. The fact that continued and strong bullish momentum, especially across gasoline and distillates, failed to attract even more buying was perhaps a sign that the sector has reached its potential based on current fundamentals. Swap dealers who often trades on behalf of producers meanwhile increased their net-short to 567k lots. A sign that U.S. shale oil producers are taking advantage of the latest run up in prices to increase their hedging activities.

The mini correction seems to have ended before impacting the overall bullish sentiment. Focus on next week’s OPEC+ meeting where the market will be looking for a decision to raise production, a move supported by Russia but opposed by Saudi Arabia. It highlights the differing opinions between the two with Russia worried that higher prices may lead to rising production from other producers, especially in the US. Saudi Arabia meanwhile wants higher prices, something that the market expect they will achieve given the outlook for a strong post-pandemic recovery. Goldman Sachs, one of the most bullish forecasters, have increased their 3-6 month’s forecast to $75/b, $10 above its previous forecast.

Gold’s continued struggle to find a defense against rising real yields and in recent weeks, a stronger dollar, accelerated last week with the net-long tumbling by 21% to 83,581 lots, a fresh 15-month low. The 22k reduction was driven by a combination of long liquidation (12.4k lots) and fresh shorts (9.8k) being added. In our latest gold market update, we highlighted the reasons why gold is currently struggling and what it will take to turn it around. So far the metal has managed to find support at $1765/oz, a critical support level. Silver managed to attract a small increase in the net-long with the tailwind from industrial metals offsetting the negative price action in gold.

The yellow metal has managed a small bounce in early Monday trading after finding support at the important $1765 level last week. Gold’s struggle to put up a defense against rising real yields, up 25 bp this year to –0.80% has also started to negative impact stocks, thereby inadvertently creating a small safe-haven bid. The much reduced net long held by funds has become one of gold’s potential tailwinds once the technical and fundamental outlook improves. Focus this week on Fed chair Powell’s testimony before Congress, his first during the Biden era, and the bond market after ten-year yields climb to a one-year high. Resistance at $1800 followed by $1810.

HG Copper and platinum traders refrained, perhaps somewhat surprisingly, from adding any fresh length. This despite seeing both metals rallying strongly to reach fresh multi-year highs as price forecasts continuing to be raised. Not least copper where the 2011 highs at $10,000/tons on LME and $4.65/lb on High Grade are increasingly being mentioned as possible targets over the coming months.

It’s vertical ascent continued overnight in Asia with High Grade (COPPERUSMAY21) jumping 3% to $4.22/lb with the 2011 record high at $4.65/lb ($10,000/t on LME) now within striking distance. Latest developments driving the surge come from China which has published its first official statement regarding economic priorities during the next five years. It sets the tone for accelerating the agricultural and rural modernization over the next five years and it includes strengthening the construction of rural public infrastructure. News that will only add to the markets increased worries about a copper supply shortfall.

The grains sector saw a small net reduction with selling of soybeans being partly offset by a second week of corn buying. Cocoa and coffee continued to be sold with lockdowns and reduced mobility cutting demand from normal sources such as bars, restaurants and airports. The cocoa net long was cut to 14,843 lots, a 13-week low and coffee to 21,059, a five-week low. 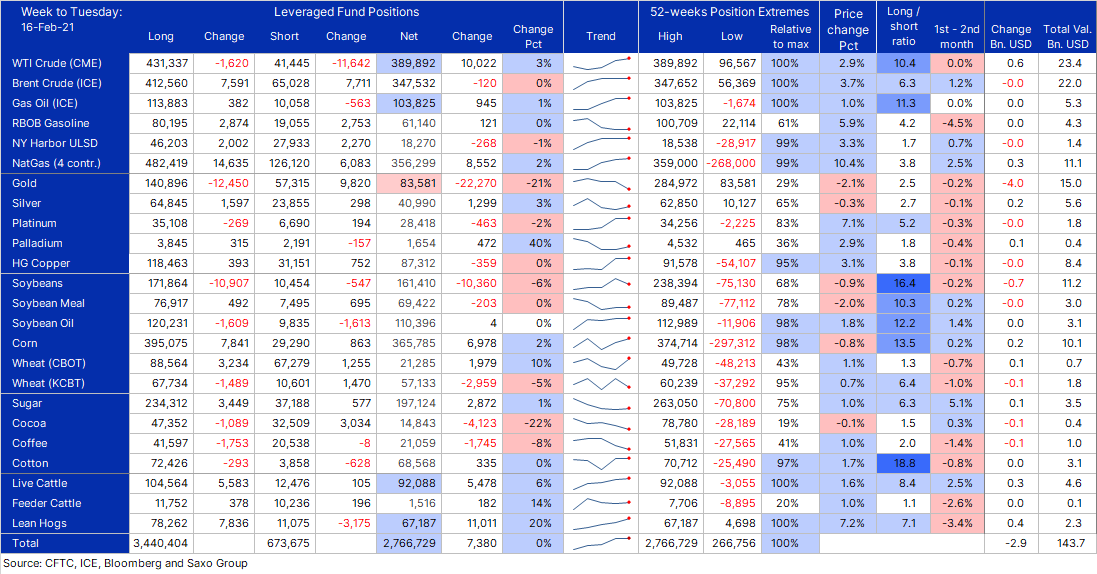 In FX, speculative flows were very modest with the overall dollar short against ten IMM currency futures and the Dollar Index staying close to unchanged at $31.1 billion. Changes were small across all currency pairs during a week where the dollar traded unchanged despite an increased focus on the bond market where nominal and real yields both continued to rise. Among the G7 currencies, the Japanese yen saw the biggest change, but the 1.3% sell-off surprisingly attracted net buying of 2,564 lots. 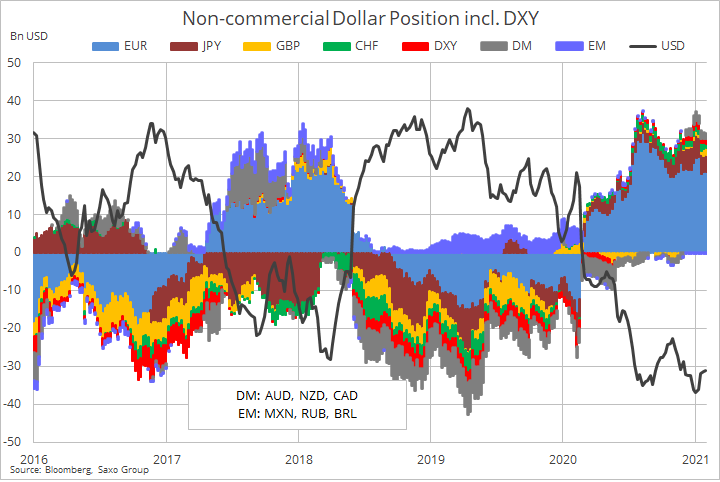 With the exception of 5’s and Ultra bonds, leveraged funds were net buyers of fixed income futures across the curve. Speculators sold Cboe VIX futures as numerous stock markets, including the S&P 500 reached record levels. The net short rose by 24,921 lots and on top of the 21,807 lots sold in the previous week the total net-short reached a one-year high at 163k lots. This before increased nervousness about rising bond yields help send stocks lower and volatility a tad higher.