Silver broke out of its triangular formation yesterday to record its best day since February 1 when it briefly spiked above $30. Gold meanwhile got rejected once again as it continues to struggle finding enough momentum to break above the key $1800 level. Overnight both trades softer with the stronger dollar off-setting a ten-week low in U.S. 10-year real yields at –0.83%.

Rising growth expectations together with the prospect for governments supported infrastructure plans as well as the green transformation and reflation focus have all helped drive a strong rally across industrial and platinum group metals in 2021. Silver has been caught between two chairs with the market struggling to work out whether the impact from industrial metals should hold a bigger sway than struggling gold. The latter due to its sensitivity towards movements in rates and the dollar, both of which up until recently had been going higher. 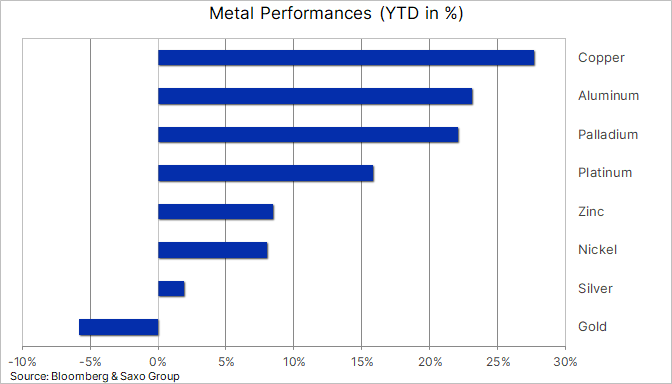 On the back of the recent strong performance across industrial metals, silver ended up taking the lead with yesterday’s trigger being the combination of weaker than expected U.S. ISM Manufacturing and higher ISM Prices Paid. The renewed pull from surging industrial metals can be seen through the gold-silver ratio which has been in a downtrend during the past month. From above 70 ounces of silver to one ounce of gold on April 1 it has since declined to a seven-week low at 66.5.

Comment from Kim Cramer Larsson, our technical analyst:
“Silver rallied almost 4% yesterday and closed above the resistance level around $26.65/oz, thereby confirming the uptrend which started back in early April. RSI is above the 60 threshold which support the bullish sentiment and only a close below $25.7 will demolish this short-term bullish scenario.”

While the double bottom in gold was confirmed on the recent break above $1765, the lack of follow-through and now multiple rejections below $1800 has left traders somewhat bewildered. The short-term technical outlook however still looks promising above $1765 and a break above $1800 could signal a move towards the $1818 and $1833, an area that undoubtedly would begin to shake out long-held trend following short positions.