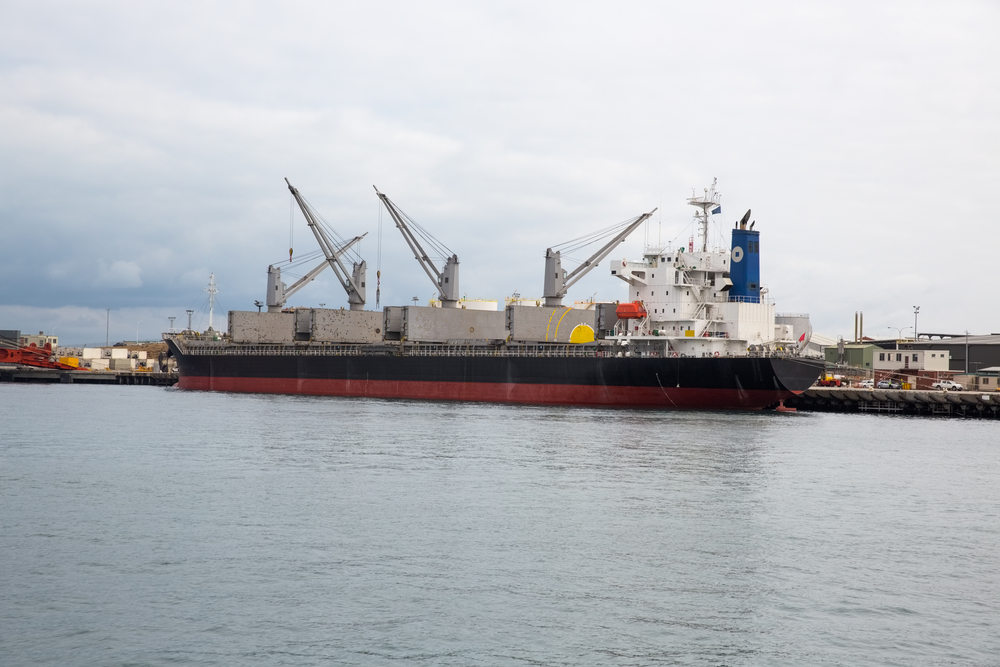 The below summary highlights futures positions and changes made by hedge funds across commodities, forex, bonds and stock indices up until last Tuesday, April 27. A week where U.S. index futures resumed their ascent, the dollar continued lower while US Treasury yields ticked higher, while staying within their established ranges. Commodities surged higher led by very strong gains in grains and soft commodities.

Money managers increased bullish commodities bets with the total net long across 24 major commodity futures rising by 4% to 2.5 million lots, representing a nominal value of $137 billion. This in response to a 3.6% rise in the Bloomberg Commodity index to a fresh ten year high. The bulk of the increase was concentrated in grains and soft commodities which rallied by 8.6% and 7.3% respectively. The biggest individual position increases was seen in sugar, coffee, wheat, gas, oil and copper. 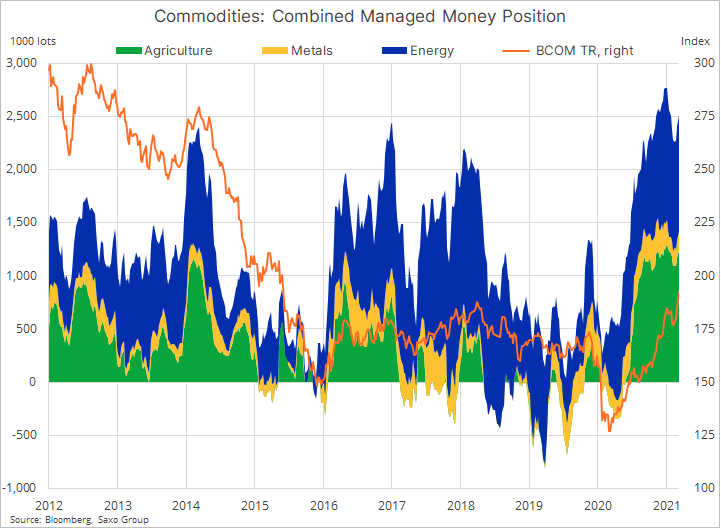 The combined net long in crude oil reached a six-week high at 677k, with the increase being led by WTI while speculators kept an almost unchanged position in Brent, primarily due to an increased amount of naked short selling. The biggest change was seen in gas oil where the net long came close to a one-year high.

Latest: Crude oil futures trade lower for a second day with the uneven demand recovery creating a somewhat challenging outlook. In India, April gasoline demand fell to the lowest level since August and increased curbs on mobility may trigger further declines into May. This at a time when higher fuel consumption is being recorded in the U.S., China and the U.K. and OPEC+ during the next three months begins to add barrels back into the market. The outlook is further being clouded by uncertainty about U.S. production growth and Iran nuclear negotiations where a deal could trigger rising production. For now, Brent crude oil trades within an ascending channel, currently between $64 and $69.

A relatively quiet week in precious metals with gold’s failure to build on the recent break above $1765 attracting fresh short selling resulting in the bulk of the 6k reduction in the net long being driven by new short positions. Silver length increased by 8% and platinum by 25% on tailwinds from surging industrial metals. The 6.3% rally in HG copper helped attract new longs with the net rising by 23% to 55.5k lots, still well below the December peak at 91.5k lots and the 2017 record at 125k lots.

Latest: Gold (XAUUSD) and silver (XAGUSD) continue to frustrate bulls and bears alike given their inability to break current ranges. Both trading higher today after surviving another downside attempt on Friday when the dollar suddenly jumped. US Treasury yields continue to trade range bound with rising breakeven (inflation expectations) being offset by lower real yields. Speculators cut length in COMEX futures last week while ETF holdings remain stuck near a one-year low. Current range in gold being $1755 to $1800.

Most of the speculative buying last week was concentrated in the agriculture sector (ex. livestock) with most grains and softs contracts seeing strong gains. Most noticeable being the strong gains in corn, wheat, sugar and coffee with dry weather in South America and the U.S. plains hurting the production prospects. The combined long in corn, soybeans and wheat reached a fresh record and with the latter well below previous peak positions, further length could be added over the coming weeks. In softs, the coffee long almost doubled while the sugar long jumped by 15% to 258k lots, the third highest exposure on record.

Latest: The Bloomberg Grains Spot index, already at an 8 year high continues higher today led by corn (CORNJUL21) and (WHEATJUL21). In corn, the spread between the July (old crop) and December (new crop) contracts has widened to 115 cents per bushel, and it highlights the current stress in the spot market as a powerful La Nina disrupts harvests in Brazil with dry weather cutting the production outlook by 8% to 104m tons. Adding to the current unease has been record Chinese imports while US planting progress and weather developments will be watched for clues as to the direction of the new crop contracts, such as December. Weekly U.S. planting progress data due later at 20:00 GMT 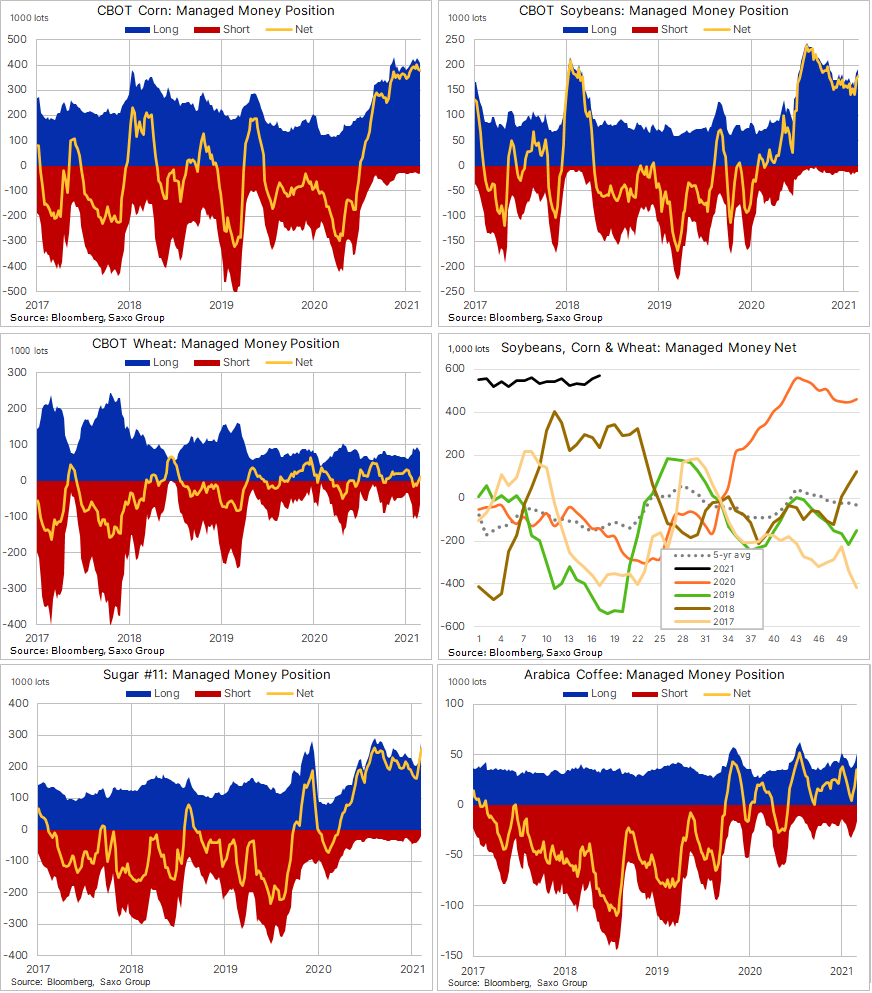 Broad speculative dollar selling lifted the net short against ten IMM currency futures and the Dollar Index by 30% to $10.3 billion, a six week high. The dollar was sold against all the major currencies with the bulk of the change being led by short-covering in Japanese yen where 11k lots ($1,3 bn equivalent) was bought. 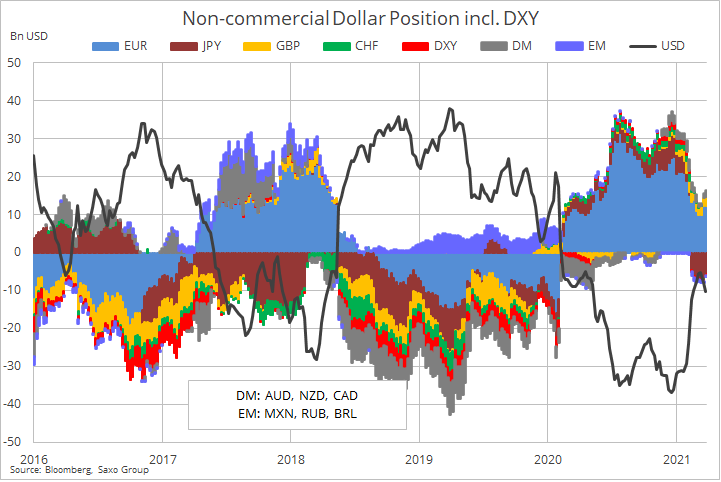 Forex: A broad breakdown between commercial and non-commercial (speculators).