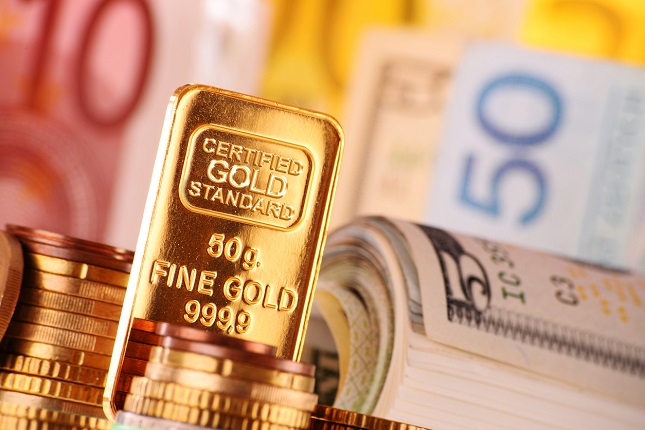 The March nonfarm payrolls were surprisingly strong. If the current favorable trend in the U.S. labor market continues, gold may struggle.

As the chart below shows, in March 2021, total nonfarm payrolls rose by 916,000 , following gains of 468,000 in February (after an upward revision). The latest gains were the largest since August 2020. It’s important to note here that job growth was widespread, although led by gains in leisure, hospitality, education, and construction. 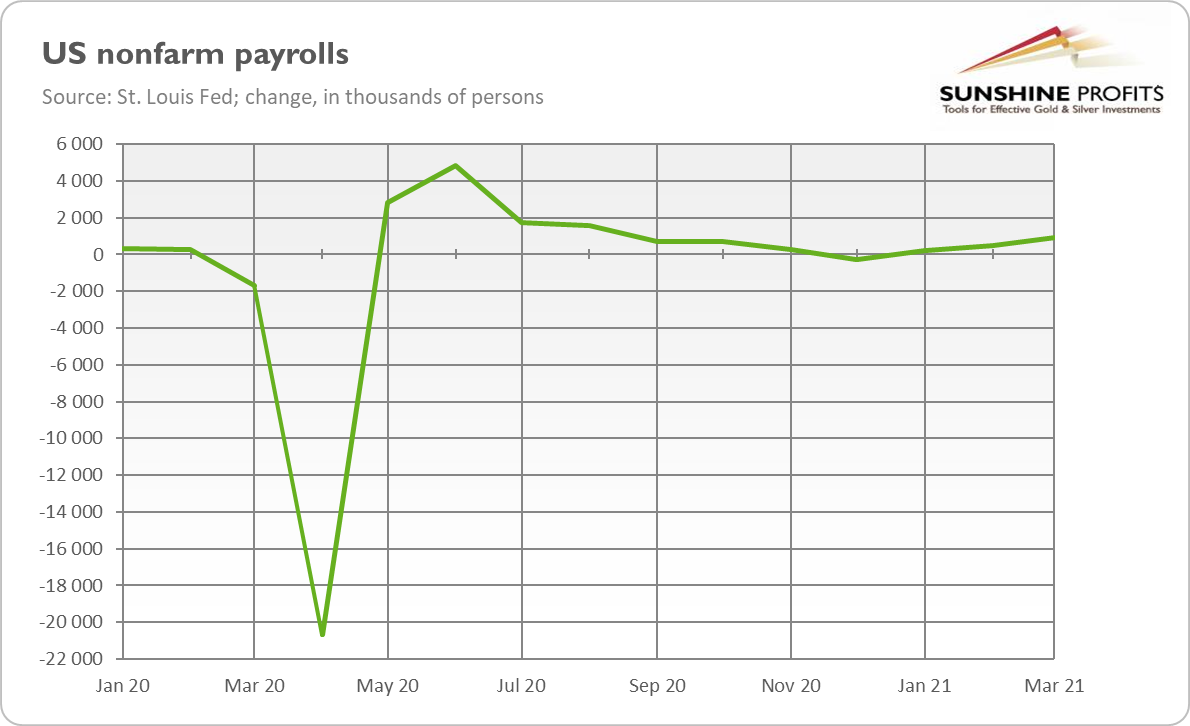 Furthermore, the U.S. economy added significantly more jobs than expected . Economists surveyed by MarketWatch forecasted 675,000 additions, but it turned out that employment in January and February combined was 156,000 higher than previously reported. Also on the positive side, the unemployment rate declined from 6.2 to 6 percent , as the chart below shows. As the unemployment rate is much below its high from April 2020, it’s clear that the U.S. labor market is recovering from the pandemic recession . 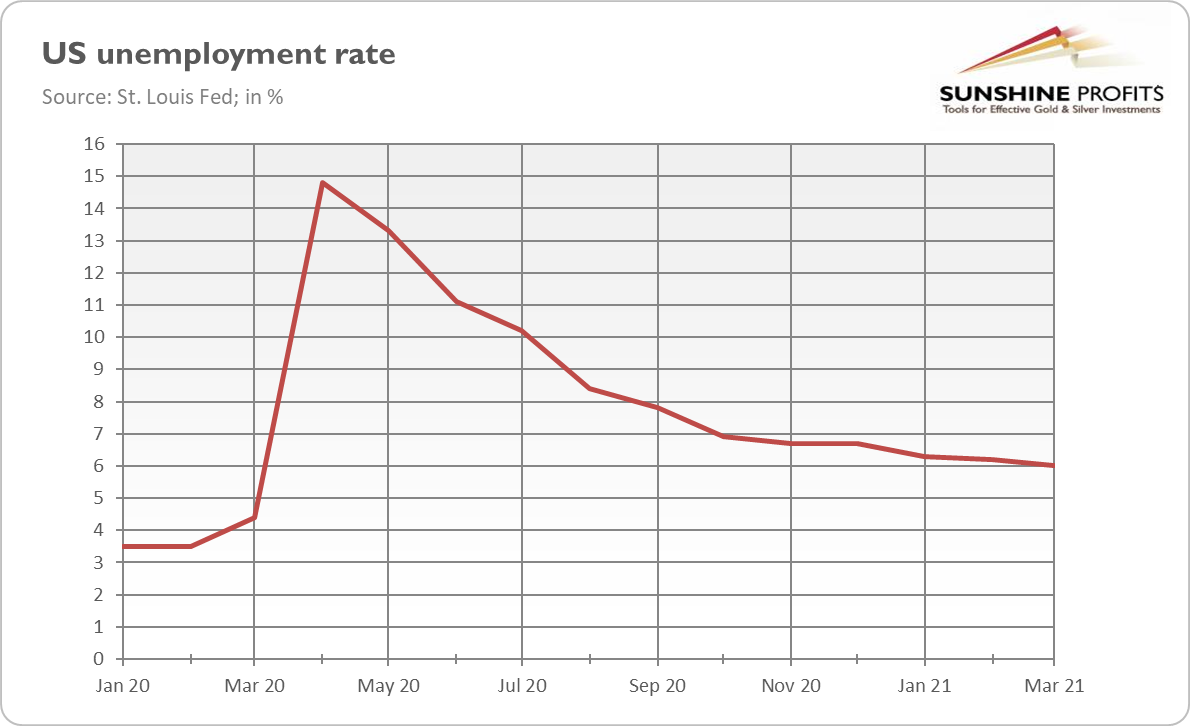 However, significant slack remains. First, the unemployment rate is still 2.5 percentage points higher compared to February 2020, before the pandemic started. Second, the broader unemployment rates, which paint a more accurate picture of unemployment, are even further from their pre-pandemic levels. For instance, the broadest U-6 rate was 10.7 percent in March, i.e., 3.7 percentage points above the level seen in early 2020. Third, the labor-participation rate is 1.8 percentage points lower than its pre-pandemic level, which means that many people simply dropped out from the labor market instead of searching for a job.

What does it all mean for the yellow metal? Well, gold’s reaction to a generally good employment situation report was positive . As the chart below shows, the London price of the shiny metal increased from $1,726 on April 1 to $1,745 on April 6, 2021, when the fixing resumed after the holidays. 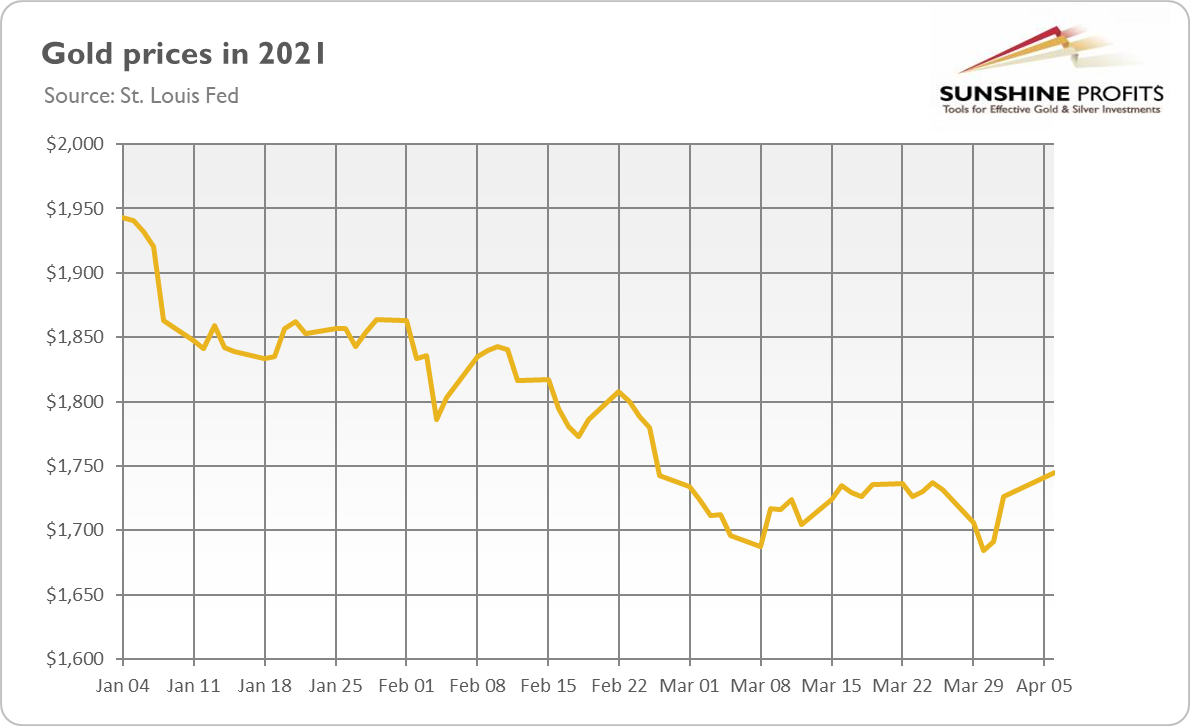 The explanation for gold’s positive reaction might lie in the fact that although the employment report was positive, it won’t be enough to alter the Fed’s monetary policy . As a reminder, the U.S. central bank wants to see “substantial further progress” towards labor market repair before tapering the asset purchases and raising the interest rates . Of course, further such reports with almost one million job gains would force the Fed to admit that the situation improved substantially.

However, the Fed would like to see a continuation of the current trend for a while before it will alter its stance. Indeed, as Chicago Federal Reserve Bank President Charles Evans recently said, “those conditions will not be met for a while (…) Policy is likely on hold for some time.”

Regardless, gold’s reaction amid the surprisingly strong nonfarm payrolls report and the accompanying rise in the bond yields could be seen as encouraging . Some analysts even believe that the yellow metal has bottomed out.

However, given that the U.S. outpaces its major peers in the pace of economic recovery, it might be too early to call the return of the gold bulls . So, the medium-term downside risks remain present in the gold market. Although the single report won’t cause an immediate shift in the Fed’s stance, if this trend continues, the market expectations of the Fed’s tapering and hikes in the federal funds rate could move up, exerting downward pressure on gold prices.