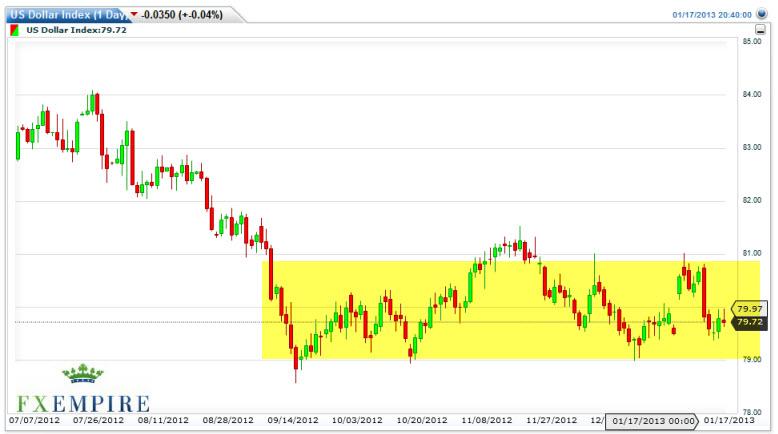 The US Dollar Index initially tried to rally during the session on Thursday, but met significant resistance at the 80 handle in order to pullback and formed a shooting star for the session. The market is still within a larger consolidation area that is bordered by both 81 and 79, so we are not overly pressed to take any large positions at this point time.

We believe that the 79 level should offer significant support, but if it does get broken down we think that this market could rocket much lower. This is because the 79 level has been so supportive, and this of course would represent a significant sea change in sentiment towards the US dollar. On a break of that level, we suspect that you will have quite a few choices as to how you want to short the US dollar in general. You can use this market of course, but we also suspect that commodity currencies will do quite well if we break down below that level also.

It’s obvious that the Euro would be a good choice also, as it is 40% of the Dollar Index. However, we feel that there aren’t plenty of other ways to play the anti-dollar sentiment if we get that break down and the European Union still offers plenty of headline risks out there.

As for buying, we now have to clear the 80 level as breaking the top of the shooting star would be enough to get us interested in going long, but it shows just how much trouble we are running into at 80 based upon the scandal. We would be interested in buying a supportive candle down near 79, just simply because the risk to reward ratio is so high at that point. Nonetheless, we think that this market is going to continue going sideways overall, but with a decidedly bearish bias over the next couple of sessions. Again, keep an eye out for the breakdown in a daily close below 79, as I could lead to fairly significant moves.