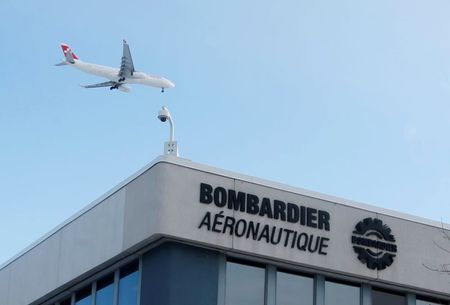 Bombardier, the maker of Global aircraft, said it expects first-quarter adjusted earnings before interest, taxes, depreciation, and amortization (EBITDA) from continuing operations of $123 million, above analysts’ average estimate of $89 million, according to IBES data from Refinitiv.

The company, which has cut thousands of jobs to save costs, will report results on Thursday.

Bombardier said its first-quarter business aircraft deliveries would be 26 planes, the same number it delivered in the year-ago quarter.

While deliveries are roughly the same, Bombardier’s product composition is shifting toward the higher-priced Global 7500 jets, which are a revenue driver.

The company expects business jet revenue to rise by 18% to $1.3 billion in the first quarter, from a year ago, beating Wall Street’s estimate of $1.18 billion.

Separately, the company on Monday launched consent solicitations with respect to its outstanding senior notes or debentures.

Bombardier said it received a letter in April from counsel to a holder of a certain series of notes, claiming that the company’s divestitures of non-core assets, including its transportation business, regional jet program and aerostructures unit, constitute a breach of certain covenants.

Bombardier said it believes that these allegations are without merit and that it has not breached any covenant.

(Reporting by Ankit Ajmera in Bengaluru and Allison Lampert in Montreal; Editing by Shailesh Kuber)