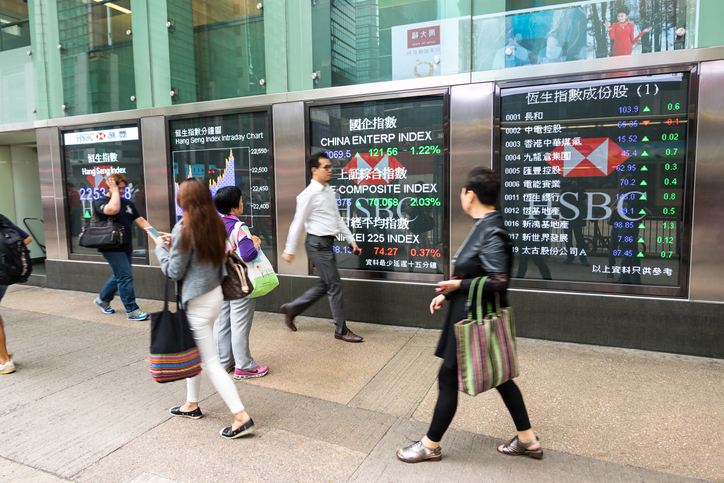 Chinese equity indices surged more than 5.5% on Monday following news US and Chinese negotiators were making substantial progress on key trade issues. The news was backed up by Trump-Tweets to the effect he would delay the implementation of March 1 tariffs. The news is mitigated by the fact tariffs may still be levied if a final deal isn’t made. Regardless, the Shanghai and Shenzen indices are now both up more than 20% from their recent lows.

Elsewhere in the region stocks were buoyant but less so than in China. The Hong Kong-based Hang Seng led with a gain of 0.50%. Shares of China Construction Bank and ZTE were at the top of listings with gains of 2.3% and 2.2%. The Japanese Nikkei, aided by a near 1.0% increase in retail giant Fast Retailing, was close behind the Hang Seng at 0.48%. The Austrialian ASX and Korean Kospi were up 0.30% and 0.09% respectively.

Trading was mixed in the EU on Monday because of trade hopes and Brexit woe fighting for dominance. On the one hand, trade talks are progressing quickly and promise to bring an end to trade-war between the US and China. The EU, also in the tariff-crosshairs, is expected to reach a tariff-avoiding deal with the US in the near future.

On the other hand, another delay in the Brexit process has traders worried hard-Brexit is unavoidable. Theresa May has delayed a key vote by Parliament because the wording on the Irish Backstop is still not acceptable. Because the deadline for Brexit is less than five weeks away there is a growing chance no deal will be reached.

The DAX was leading advancing indices at midday. The German index was up about 0.50% with the French CAC up about half that. The UK FTSE, understandably, lagged Monday trading with a loss near -0.25%.

In stock news, shares of UK home builder Persimmon were down -5.0% after lawmakers revealed it is under investigation. Lawmakers are concerned about practices relating to the Help To Buy Scheme. In Italy, banks led with gains near 2.0% after Fitch reaffirmed its BBB credit rating on the country.

A Trump/Xi Summit Is In Sight

Shares of US-listed stocks were moving higher in the early Monday session. The major indices were looking at an open near 0.55% in the premarket session as trade hopes intensify. Trump says “substantial progress” has been made on key issues like intellectual property rights and technology transfers. The news Trump would delay the March 1st tariffs was also compounded by emerging details about a Trump/Xi Summit. The summit is expected in late March and will be located at Trump’s Mar-a-Lago resort.

Shares of GE were on the move in early trading after it announced the sale of its biopharma unit for $21.4 billion. The deal includes $21 billion in cash that GE plans to use for deleveraging and balance sheet improvement. Barrick Gold has made an all-stock offer to merge with rival Newmont Mining. Newmont is already discussing terms to merge with Goldcorp, Barrick Gold says its deal is a superior offer.