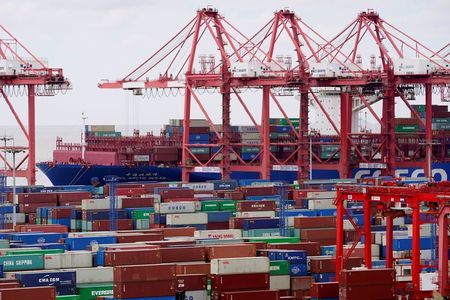 Exports are expected to have risen 24.1% in April from a year earlier, according to the median forecast in a Reuters poll of 21 economists, slower than the 30.6% jump in March.

The forecast comes amid concerns recent stellar export growth will face short-term challenges as production in other exporting countries disrupted by the coronavirus resumes.

“The continued recovery in global demand that we expect will mostly benefit services rather than world goods trade, which is already above pre-virus levels,” said analysts with Capital Economics. “And China’s share of global exports is likely to drop back as vaccines allow a return to more normal global consumption patterns.”

They noted China’s export strength concentrated in shipments of electronics, furniture and recreational goods for home use, which have benefited from demand from the pandemic-induced lockdowns.

Some exporters are also grappling with surging prices of raw materials, which are threatening to drag on profits and deter them from taking on new orders.

In another sign of the weaknesses to come, official factory surveys showed a gauge for new export orders slipped in April from the previous month.

Imports likely rose 42.5% in April versus a year ago, the poll showed, higher than the 38.1% gain in March.

“Import growth may surge in April from March mainly on a very low base, the ongoing domestic demand recovery, higher commodity prices and strong RMB appreciation since late May 2020,” said analysts with Nomura.

China’s trade surplus is expected to be $28.1 billion in April, following a surplus of $13.8 billion in March, the poll showed. The data will be released on Friday.

“Over the medium-term, we expect the downtrend of export growth to continue in coming months and the pace of its slowdown to be more significant in the second half of this year,” Nomura analysts said.