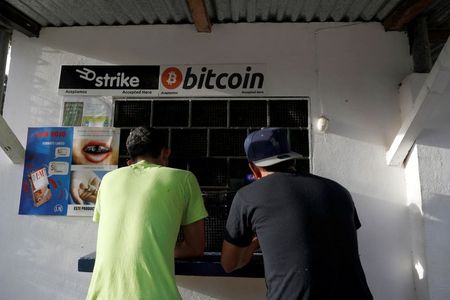 By Tom Arnold and Karin Strohecker

El Salvador this month became the first country to adopt bitcoin as legal tender in a move taking effect in September.

Speaking in the interview released on Wednesday, Bukele said the move would boost jobs and economic development to the Central America country.

He said he was confident the project would be a success – despite the World Bank declining to offer technical support and concerns expressed by the International Monetary Fund.

“It looks bulletproof,” he said in an hour-long interview with bitcoin podcaster Peter McCormack. “I’m pretty sure this is going to work, not only for us but for humanity, because it is a leap forward for humanity.

“(We will be) at least becoming a little less dependent on the output of new dollars, and the new inflation that’s coming with those all those new dollars,” he said.

There was no plan to hold bitcoin in national reserves, though that might happen “probably in the future”, he said.

The World Bank declined to give assistance to El Salvador’s bitcoin implementation given the environmental and transparency drawbacks.

“Having the World Bank, advisers or technical support would have been nice, but we really don’t need it,” Bukele said, adding local talent was more than enough.

He acknowledged there might be some risks to the push.

“But I really do not see them as big risk, only probably getting some people angry at us but they haven’t been so nice to us anyway, so you know, why not try something new?”

Analyst have voiced concerns that the bitcoin push could endanger the country’s request for an $1 billion programme to the IMF. The fund has voiced economic and legal concerns regarding the move, though Bukele said his government had spelled out its plan and would offer more explanation if needed.

Bukele also said he had received a lot of interest from parties over exploiting renewable energy from the country’s volcanoes to build a bitcoin mining hub.

“We have discovered new (geothermal) wells that will give us 95 megawatts, which is not huge but still quite considerable,” he said.

A bitcoin mining plant would be built at a cost of $480 million, he said, while bitcoin would pay for infrastructure from schools to bridges.