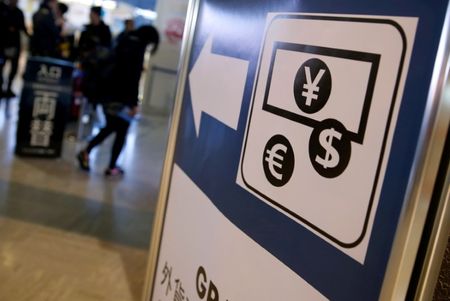 The dollar index, which tracks the greenback against six major currencies, was up 0.37% at 92.213, its highest since mid-April. That puts the index on pace for a weekly gain of nearly 2%, its best weekly jump in about 14 months.

The jolt to foreign exchanges was triggered on Wednesday by Fed forecasts showing 13 of the 18-person policy board saw rates rising in 2023, versus only six previously, with the median board member tipping two hikes in 2023.

Investors’ risk appetite took another hit after St. Louis Federal Reserve President James Bullard said on Friday that the U.S. central bank’s shift this week toward a faster tightening of monetary policy was a “natural” response to economic growth and particularly inflation moving quicker than expected as the country reopens from the coronavirus pandemic.

“I think this is a direct echo of the 2013 taper tantrum. You are seeing a perceived shift in the Fed’s reaction function driving investors into the safety of the U.S. dollar,” said Karl Schamotta, chief market strategist at Cambridge Global Payments in Toronto.

With investors pricing in a sooner-than-expected tapering of extraordinary U.S. monetary stimulus, the euro and the yen have come under selling pressure over the last few trading sessions.

“Essentially, the entire world was short the dollar going into this, everyone from speculative traders to corporates to investors,” Schamotta said.

“You are seeing a wholesale unwind here,” he said.

The unwind of sizeable bearish bets against the dollar is expected to provide support for the greenback in coming days, investors said.

Goldman Sachs Asset Management’s head of currency, Arnab Nilim, who had been short the U.S. currency headed into the June Fed meeting, told Reuters he has reduced the position and expects the U.S. dollar to perform well, especially against the low-yielding currencies.

With a dovish European Central Bank seemingly far behind the Fed in the monetary policy cycle, traders will be reluctant to buy euros against dollars.

“The U.S. central bank is one step ahead and as a result USD is likely to remain well supported against the EUR,” Commerzbank strategists said in their daily note.

Sterling extended its fall against the U.S. dollar on Friday, dropping below $1.39, hurt by the Fed’s hawkish surprise and an unexpected fall in Britain’s retail sales.

The risk-off move hit crypto currencies as well, with bitcoin failing to get a lift from the news that Spanish bank BBVA would open a bitcoin trading service to all private banking clients in Switzerland. Bitcoin was down 7.0% at $35,451.09.