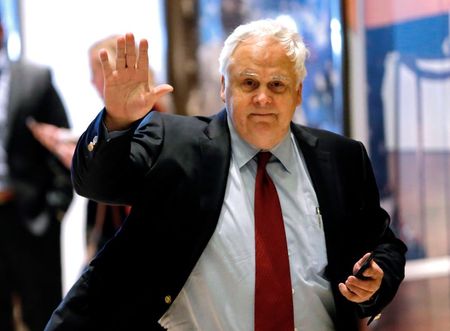 The previously unreported testimony will come at a hearing before the House Transportation and Infrastructure Committee titled “The Business Case for Climate Solutions” and is also expected to include testimony from electric utility PG&E Corp.

Representative Peter DeFazio, a Democrat who chairs the panel, said in an interview that a massive infrastructure bill will create millions of new jobs and reduce carbon emissions.

“We’re trying to make the business case — everybody else is going to go electric — you don’t have to believe in climate change,” DeFazio said.

Last week, FedEx said it planned to become carbon-neutral by 2040 and will invest $2 billion in vehicle electrification, sustainable energy, and carbon sequestration. FedEx also said its entire parcel pickup and delivery fleet will be zero–emission electric vehicles by 2040.

Amazon.com in 2019 pledged to make the largest U.S. e-commerce company net carbon-neutral by 2040 and to buy tens of thousands of electric delivery vans. A number of automakers and start-up companies are working to develop electric-vehicle pickups and larger delivery vehicles.

A FedEx spokeswoman declined to comment on Smith’s testimony.

Democrats want to boost electric buses, see thousands of new charging stations installed and facilitate the large electric trucks coming to market. DeFazio backed legislation this week to give the U.S. Postal Service $6 billion to make its next generation of delivery vehicles nearly all EVs.