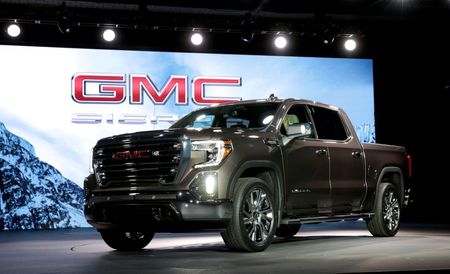 By Nick Carey and Ben Klayman

The Detroit automaker, whose shares were up 3.3% in early trading, also said its full-year pre-tax profit would come in at the high end of its forecast.

“The speed and agility of our team are front and center as we move from managing through a pandemic to managing the global semiconductor shortage,” Chief Executive Mary Barra said in a letter to shareholders. “This remains a challenging period.”

Barra added the No. 1 U.S. automaker was focused on “maximizing production of high-demand and capacity-constrained vehicles” like the full-sized Chevrolet Silverado pickup, and GMC Yukon, Chevy Suburban and Cadillac Escalade SUVs.

“Every region in the world has been dealing with the supply and demand imbalance for semiconductors, and we have been working through some significant disruptions to production,” she said.

GM reiterated its full-year 2021 earnings guidance and said “based on what we know today,” its results will be at the upper end of the $10 billion to $11 billion adjusted pre-tax profit it has previously forecast. Morgan Stanley analyst Adam Jonas said GM’s profit and full-year forecast were a relief after Ford Motor Co’s warning last week about the expected chip hit.

GM stuck to earlier forecasts the chip shortage could shave $1.5 billion to $2 billion from this year’s profits.

Carmakers across the world have had to curb output, hampering their attempts to recover from the COVID-19 pandemic, due to a shortage of vital chips used in everything from computer management of engines to driver assistance systems.

Stellantis, created from the merger of PSA and Fiat Chrysler, on Wednesday said it expects the shortage to take a bigger bite out of second-quarter production and warned the disruption could last into 2022.

Ford said last week it expects second-quarter vehicle output to be halved by the shortage.

Evercore ISI analyst Chris McNally asked in a research note why Ford was potentially expecting a bigger second-quarter production hit than GM, which he joked stood for “Good Morning” after the strong results.

Thanks to high consumer demand that has pushed up prices, focusing on those high-margin models contributed $3.2 billion to GM’s first-quarter pre-tax profit.

While GM has continued to build its highest-profit vehicles, it has hoarded supplies of chips by idling other factories. Last week, it extended downtime for plants in Kansas and Ontario into early July and late June, respectively, curtailing output of the Cadillac XT4 and Chevy Equinox SUVs, and the Chevy Malibu sedan.

GM said its capital spending budget this year will be $9 billion to $10 billion, and Barra said about $7 billion of that would be focused on electric and autonomous vehicle development.