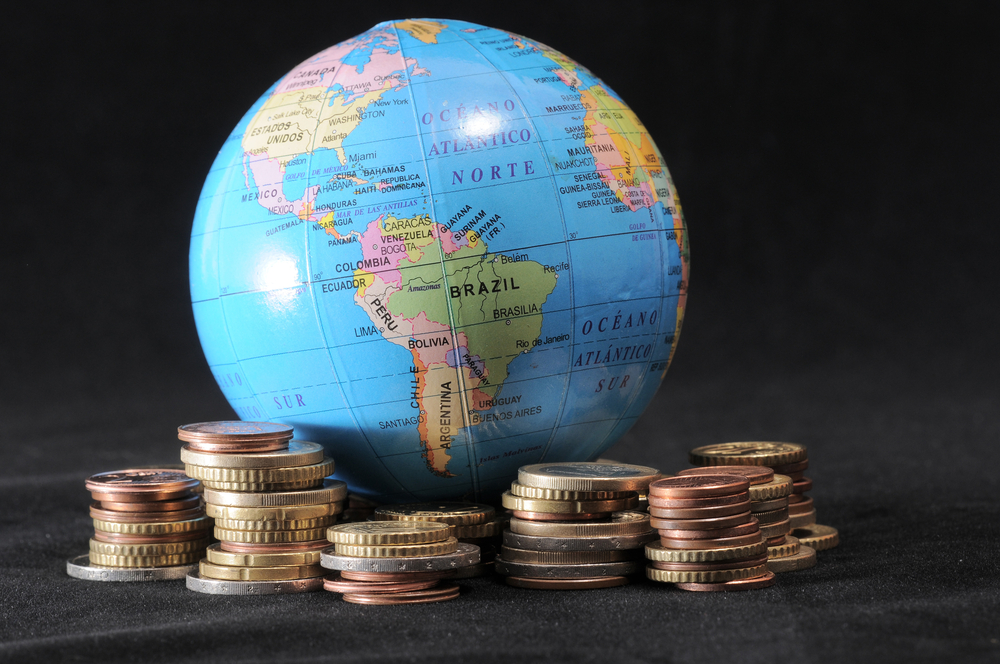 Europe’s Dow Jones Stoxx 600 is off a little more to double this week’s decline and leaves it in a position to be the biggest drop since panicked days in mid-March. US shares are narrowly mixed, but coming into today, the S&P 500 is off 3.7% for the week, which, if sustained, would also be the largest decline in nearly two months.

Bond markets are better bid, and the US 10-year benchmark is off four basis points to 61 bp, the lowest in three and half weeks, despite the deluge of supply. European yields are off 1-3 bp. The dollar is firm against nearly all the world’s currencies. The yen, among the majors, and the Turkish lira and Russian rouble in the emerging market space, are the notable exceptions. Oil and gold are near five-day highs (~$1720 and $27 basis July WTI)

Australia reported a massive 594k job loss in April. While it was slightly more than most economists expected, given the magnitude, the median forecast of the Bloomberg survey for a loss of 575k proved fairly accurate. About 220k were full-time positions.

The unemployment rate rose from 5.2% to 6.2%. Economists had projected a jump to 8.2%. Australia’s 10-year yield is dipping below 90 bp for the first time this week. Wednesday saw record demand at the 10-year sale while the central bank has stepped back from its purchase program.

The Bank of Japan has also reduced its buying of equity ETFs and REITs. Its JGB buying had been tapered under its yield curve control initiative. Back in the particularly dark days in March, the BOJ bought a little more than JPY200 bln of the ETFs on four different occasions.

In the first five sessions of May, it purchased a total of JPY126.5 bln. Separately, a BOJ lending initiative in April that pays banks 10 bp on reserves associated with lending under the program is off to a successful start, and BOJ Kuroda hinted at an emergency meeting before the next formal meeting (June 16) to unveil a new facility to lend to small businesses.

Following the Reserve Bank of New Zealand’s move to put negative rates on the table, the government approved an NZD$50 bln (~$30 bln) stimulus package. It projects that the country’s debt will rise over 53% of GDP from less than 20% last year.

The 10-year benchmark bond rose six basis points today from the record low hit yesterday below 60 bp. Year-to-date, the Kiwi is the second worse performing major currency, off a little more than 11% (behind the Norwegian krone that has depreciated by nearly 13.7%).

It is the longest streak since late March and early April. Watch the 20-day moving average. It is found near $0.6430 today, and although it has been flirted with on an intraday basis, it has not closed below it since April 3. A break of the $0.6375 area may be needed to confirm the top we have been anticipating. The dollar is little changed against the Chinese yuan and is hovering around the CNY7.09-CNY7.10 area, the upper end of its recent trading range.

Bank of England Governor Bailey hinted that the GBP200 bln bond purchase program will likely be extended as early as next month (next MPC meeting is June 18). Recall that at last month’s meeting, the majority wanted to wait while two members dissented in favor of an immediate increase of GBP100 bln in Gilt purchases.

While much attention has been focused on the fact that some derivatives in the US imply negative rates, the UK 2-year Gilt has a negative for the third consecutive session (about minus 3 bp). Since our experience with negative rates is so limited, we relied on induction to derive a hypothesis that countries with negative rates had central banks that led the move and have current account surpluses. That hypothesis is being tested. We suspect that the currency would have to bear more of the burden if this turns out to be the case.

The euro reached a seven-day high yesterday and approached $1.09 before reversing lower and recording new session lows late in the session near $1.0810. It is in about a 15-tick range on either side of that level, with little enthusiasm in either direction. There is a 1.2 bln euro option at $1.08 that expires today. Below there is an option for 1.8 bln euros at $1.0750.

The euro settled last week near $1.0840. Sterling fell to $1.2180 today, its lowest level since April 7, when it recorded the month’s low near $1.2165. It is lower for the fourth consecutive session, which is also its longest losing streak since March. Initial resistance is now seen near previous support in the $1.2250 area.

Powell had no more luck than his colleagues in removing the risk that the Federal Reserve will adopt a negative interest rate target. The implied yield of April 2021 through March 2022 fed funds futures contracts remains negative. The OIS forward curve is slightly negative two and three-years out. The impact on the dollar seems minimal at best.

It is higher against all the major currencies this month, but the Norwegian krone (~0.60%) and yen (~0.30%). Overall, Powell’s economic assessment was very somber. He indicated that a report out today will show that 40% of the households under $40k a year income, who had a job in February, lost it. Powell advised not placing much stock in estimates of full employment. The Chair tends not to put weight on economist’s intangible concepts like r-star (natural interest rate) or full-employment.

Powell called for more fiscal support, a day after the House of Representatives prepared an additional $3 trillion spending bill. When coupled with Dr. Fauci’s comments the previous day, calling for more testing and tracking, and slowing the re-opening process, the message appears squeezed risk appetites.

There are two highlights of the North American session today. First is the release of the US weekly initial jobless claims. Economists expected a decline to 2.5 mln, which is still around ten-times larger than what was prevailing before the crisis. It has been gradually declining since reaching above 6.8 mln in late March. Separately, the continuing claims are likely to push above 25 mln.

Note that the survey for the next monthly jobs report is being conducted this week. Second, the central bank of Mexico meets today, and the consensus forecast is for a 50 bp cut to 5.50%. A week ago, Mexico reported that April CPI fell to 2.15%. Given this and the broad stability of the peso, we suspect that if Banxico is to surprise, it is more likely to deliver a larger rather than a smaller cut.

For the fourth consecutive session, the US dollar has edged above the previous session’s high against the Canadian dollar. However, it is better offered in the European morning. The CAD1.4040-CAD1.4060 may provide support today, but it seems particularly sensitive to the broader risk appetites.

Tuesday’s range in the greenback against the Mexican peso is to be watched (~MXN23.75-MXN24.40). After rallying strongly in March and into early April, the US dollar has been consolidating for over a month and has largely been confined to a MXN23-MXN25 range. Lastly, note the EIA reported the first decline in US oil inventories (-745k barrels) since the middle of January.

Holdings in Cushing fell by 3 mln barrels. This, coupled with the IEA assessment of a marginal improvement in supply (reined in) and demand (a little stronger) dynamics, are helping to underpin prices today.

This article was written by Marc Chandler, Marcto Market.