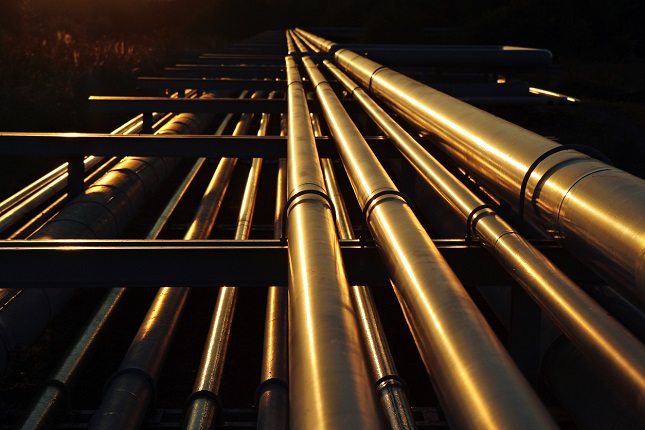 The weather driven rally continued on Wednesday with natural gas futures closing higher for a fifth consecutive session. The price action also suggests that aggressive buyers are betting on a bullish storage report on Thursday.

The market continued to be supported by forecasts for increased heating demand over the next two weeks. According to data from Platts Analytics’ Bentek Energy, U.S. heating demand hit an eight-month high of 86.9 Bcf/d last Monday and 89.6 Bcf/d last Tuesday.

Additionally, resilient power burn levels in both the Northeast and Midwest, where low cash prices and nuclear outages have kept gas economic compared with coal.

That compares with an increase of 54 bcf during the same week a year earlier and the five-year average of 45 bcf for the period.

The report estimates have been all over the map this week so this can only mean to expect a volatile reaction to today’s EIA report. Natural gas prices could soar if the storage number is a single digit. We could see a mild rally if it comes in at 10 to 19. I think a storage number 20 or higher will give earlier buyers an excuse to book profits.

Watch the price action and read the order flow at $3.160 today. Trader reaction to this level will tell us if the buying is getting stronger, or if sellers are retaking control.

A sustained move over $3.160 could fuel a fast rally into the main top at $3.198. This is a potential trigger point for an acceleration to the upside with $3.353 the next major upside target. 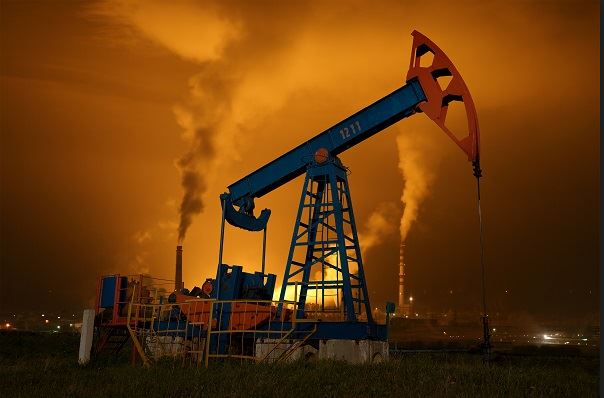 Nearby by crude oil prices rose last week to their highest level in more than two years, bolstered by rising global demand and physical prices and increased expectations that OPEC and other producing countries will extend a deal to cut production.

Despite expectations for a higher weekly close, we did see some weakness at times last week. This price action was fueled by a surge in U.S. crude exports to an all-time high and as American drillers pumped near record levels.

New data showed the United States exported 2.13 million barrels a day of oil in the week through October 27, the first time the nation has crossed the 2 million-barrels-per-day mark.

News of rising demand was supportive. China’s oil demand growth appears to be accelerating with the country importing roughly 9 million barrels per day, surpassing the United States as the world’s biggest crude importer.

Expectations that we’re going to see the production cut extended and robust demand should continue to provide support. The global economy is looking good and China’s oil demand growth appears to be accelerating.

Physical oil prices are also climbing with Saudi Aramco, the UAE’s ADNOC and Qatar Petroleum, raising prices for Asian buyers. Additionally, Aramco’s December premium is trading over the average of the Oman and Dubai benchmarks. This puts it at a three year high.

Prices could get an additional boost this week due to another drop in the number of U.S. oil rigs. According to energy services firm Baker Hughes, oil rigs fell by 8 to 729.

Traders will be also watching the ongoing financial troubles in OPEC-member Venezuela.

The tone is expected to continue to remain bullish over the near-term since the OPEC meeting at which the production cut extension should be announced is not going to be held until November 30. This gives speculators plenty of time to drive prices higher.

If we do see short-term topping action, it is likely to be related to increasing U.S. production. This key issue may put a lid on the rally. The question remains whether higher prices will drive U.S. producers to increase shale output. 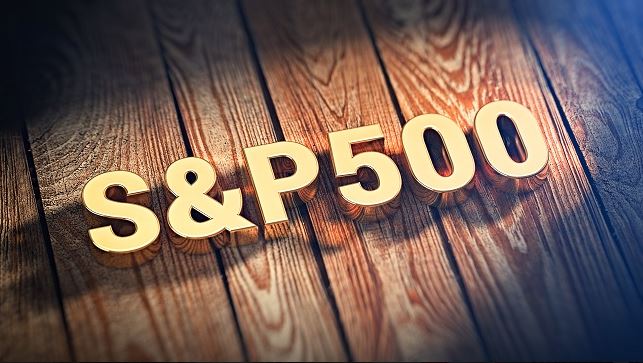 U.S. stocks are drifting lower on Tuesday as the euphoria over a possible peaceful solution between the United States and North Korea seems to have worn off. Investors are coming back to reality, reacting to a huge drop in retail stocks.

The SPDR S&P Retail ETF (XRT) was down 2.3 percent at the mid-session, mostly in reaction to three stocks:  Advance Auto Parts, Dick’s Sporting Goods and Home Depot. Advance Auto Parts posted weaker-than-expected earnings, triggering its worst one-day performance ever. Dick’s Sporting Goods also missed on earnings, triggering a 20% loss in its stock. Finally, Home Depot was a big drag on the Dow. It posted better-than-expected earnings and sales, however, its stock still fell 2.9 percent. Investors attributed the low to increased competition from Amazon.

The overall market indexes were being influenced by both bullish and bearish sectors, leading to the almost sideways price action. For example, Home Depot pressured the Dow, but Apple supported the blue chip average. Consumer staples stocks were good for the S&P 500, but telecommunication stocks were not.

Bank stocks continued to outperform the market this week due to better-than-expected economic data which helped drive up Treasury yields. When Treasury yields rise, banks tend to make more money.

In economic news, U.S. Retail Sales rose 0.6 percent in July, better than the expected 0.4 percent. Meanwhile, import prices rebounded after two straight months of declines, advancing 0.1 percent. The Empire State Manufacturing Index blew away the estimate with a 25.2 gain in August versus a 10.1 estimate and 9.8 previous read.

The solid retail sales data helped increase the chances for a Federal Reserve rate hike in December. According to the CME Group’s FedWatch tool, the chances of a rate hike jumped to 54 percent. On Monday, the indicator stood at 37 percent.

Although today is likely to be a down day based on the mid-session performance, the price action so far this week suggests that investors believe the economic expansion will continue and that the market will eventually overcome the geopolitical volatility. 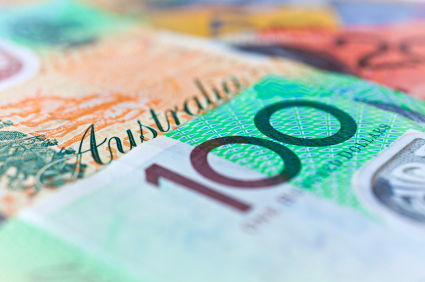 The Australian Dollar is trading sharply higher and rapidly approaching its highest level since May 2 as strong economic growth data reduced fears of an economic contraction. The AUD/USD is currently trading .7552, up 0.0046 or +0.62%. The high price target is the early May top at .7556.

Traders are reacting to a surprise report that showed Australia’s GDP expanded by 0.3% in first quarter in seasonally adjusted chain volume term, indicating the year-on-year increase had slowed to 1.7%. Traders were expecting a reading of 1.2%.

Currently representing the weakest expansion since the September quarter of 2009, the data met the market consensus, pushing Australia’s run of uninterrupted economic growth to 103 quarters. The forecast for GDP had ranged from -0.5 to +0.7, showing at least some were expecting the economy to slip. This “some” included the Reserve Bank of Australia, which warned on Tuesday that GDP could come in lower.

On Tuesday, the RBA kept its benchmark interest rates at a record low of 1.5 percent, and pointed to weaker growth in the quarter ended on March 31. Economists said GDP would come in weaker than expected after a disappointment in the country’s current account figures.

“Year-ended GDP growth is expected to have slowed in the March quarter, reflecting the quarter-to-quarter variation in growth figures. Looking forward, economic growth is still expected to increase gradually over the next couple of years to a little above 3 percent,” Reserve Bank of Australia’s governor Philip Lowe said in a statement.

Today’s price action indicates that AUD/USD traders were caught off guard by the GDP numbers and are scrambling to cover their short positions.

The New Zealand Dollar is being underpinned by a rise in dairy prices. On Tuesday, dairy product prices advanced at the Global Dairy Trade auction, increasing for the fourth consecutive time amid strong demand. The GDT price index climbed 3.6 percent from the previous auction two weeks ago to US $3,166.

Both the AUD/USD and NZD/USD are being supported by a steep drop in U.S. Treasury yields. Yesterday, the benchmark 10-year Treasury yield broke through key support, falling to levels not seen since November 10. This move helped make Australian and New Zealand bonds more attractive investments.

The momentum is too the upside in both Forex pairs, but the buying could slow later today as investors prepare for the latest Trade Balance data from Australia and the three major events on Thursday – the U.K. elections, the European Central Bank monetary policy announcement and the testimony of former FBI Director James Comey before the U.S. Senate Intelligence Committee. They events affect risk and the U.S. Dollar so the Aussie and the Kiwi could see some volatility. 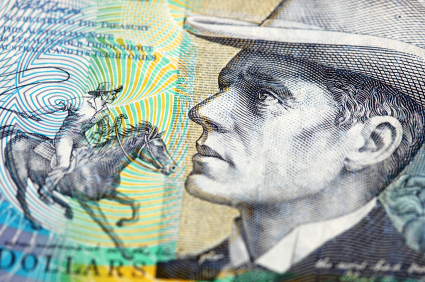 The RBA remains confident economic activity will pick up again to reach around 3 percent. This is perhaps the major reason the central bank decided to keep interest rates unchanged.

“Year-ended GDP growth is expected to have slowed in the March quarter, reflecting the quarter-to-quarter variation in the growth figures. Looking forward, economic growth is still expected to increase gradually over the next couple of years to a little above 3 percent,” Reserve Bank of Australia’s governor Philip Lowe said in a statement.

Other than the bearish commentary of GDP, the RBA kept its language largely unchanged.

In other news, economists are also warning that Australia’s GDP data, due on Wednesday, will come in weaker than expected after disappointing current account figures.

In the Current Account report released earlier in the session, Australia’s current account deficit narrowed to its smallest in more than 15 years last quarter, courtesy of surging prices for its resource exports, providing a bulwark for the country’s endangered triple-A credit rating.

The shortfall of $3.1 billion disappointed investors who had hoped for a surplus. The main miss came from investment income, with Australians earning less from their assets abroad. This bearish news initially sent the Australian Dollar lower.

The volume of exports shipped also declined, partly due to bad weather. It shaved a larger than forecast 0.7 percentage points from real gross domestic product (GDP). Other data out on Tuesday showed government spending added only marginally to growth in the first quarter.

All combined, analysts are now forecasting the economy expanded a meager 0.2 percent in the quarter, lower than the previous quarter’s brisk 1.1 percent.

In Wednesday’s GDP report, traders expect growth for the year to come in at about 1.6 percent, down from 2.4 percent.

Based on Tuesday’s data, the chances of a further rate cut at some point this year have risen and the chances of interest rates rising at all in 2017 or next have fallen.

The New Zealand Dollar was supported by a weaker outlook for the U.S. economy and stronger domestic markets. On Tuesday, Prices in the latest Global Dairy Trade (GDT) Auction, the 11th sale of calendar 2017, rose 0.6% following a 3.2% gain previously. This was the 6th successive gain with prices rising close to 15% in the past two months.